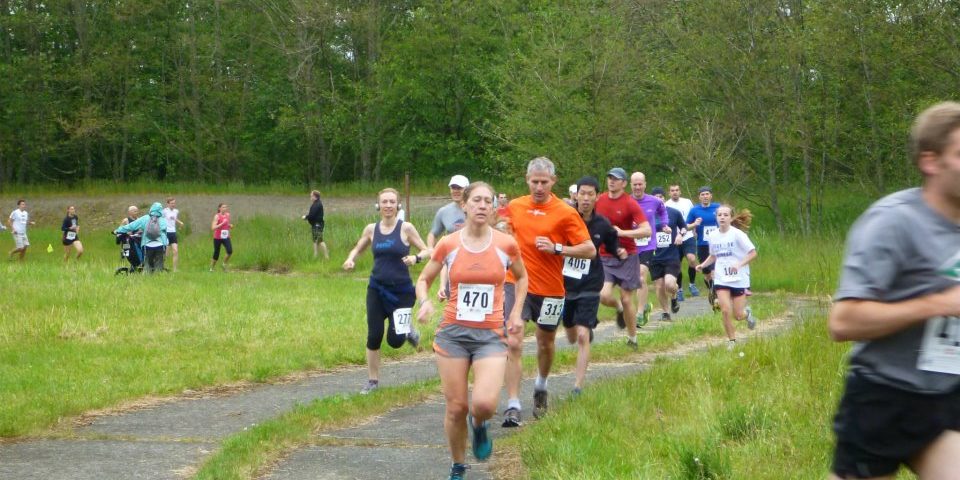 Here’s a long-overdue continuation of the previous “racing news” post….

Travis Boyd welcomed daughter Julia into the world on April 12th and is looking forward to summer road races.

Max Ferguson was disappointed with his showing at the Vancouver Marathon (23rd, 2:47). However, he notes, “My build-up to Vancouver did yield some fantastic performances! I set a new course record at the Yakima Skyline 25k in 2:15, narrowly winning in a kick at the end. I also ran a 15 second PR at the St Patricks Day Dash, running 19:15, and finishing 16th in easily the deepest field in years.” His summer and fall plans include the Langley Half Marathon (where he will defend his title), Chuckanut 30k, Cougar 13, Tomahawk Twilight Meet, some cross-country races, and the Amica Seattle Half Marathon.

It’s been a fun Spring of Racing so far. I worked my way up to 7th place in 15:58 at the Top Pot 5K. This had a pretty good field of people to race with. The following weekend I ran the American Lung Association’s fund raising Fight for Air 5K, winning in 15:48. I then battled through the trails to finish second at the Cougar Mountain 5 miler.

I ran with five friends, including fellow SRC runner Destry Johnson, to victory in the Briefcase Relay during the Fremont 5K. Each runner races one thousand meters while carrying a briefcase full of five food cans, which are donated to Northwest Harvest. We broke the course record, running a 15:03. An hour later, Destry pulled out the victory in 15:45, while I managed 5th place in 16:11.

The women on the team have also continued to race since my previous post. Marlene Farrell reported on her trip to the USATF Half Marathon Championships in a separate entry. Trisha Steidl offers the following update:

[After the Rhody Run] I then had a week off from racing and today completed three weeks in a row. That’s a big deal for me since, in the past few years, I rarely even had the opportunity to race that much period, much less this often!

Unfortunately I can’t say I felt good for any of these races. I don’t know if it’s because I’m finally able to train and my body is adjusting and adapting to all the demands I’m placing on it or if there’s something more to it….

Race #2 was the XTERRA Lord Hill 10K (-ish) put on by Northwest Trail Runs. I’d never been to Lord Hill before, so wasn’t sure what to expect. I was looking forward to experiencing something new and different and not having any expectations of what I “should” be able to do on the course. It poured the night before and I found my shoe choice wasn’t ideal for the slippery sections. However, it wasn’t nearly as muddy as I anticipated it might be.

After the half-marathoners split off from the 10K (maybe 20 mins into the race), I found that the guys in front of me I had been “competing” against thus far weren’t in my race. That meant I had no idea where in the field I was. Fortunately there is a short out-and-back section and there I saw I was 3rd overall. I also saw that there was a guy that was moving up the field, currently in 4th. I knew it was more motivating to him to beat the chick ahead of him than it was for me to beat the guy behind me, so I tried to stay focused on finishing in the top 3 overall (yes, it’s a small race, but I still thought it would be pretty cool and it gave me a goal to focus on when my feet were slipping and my quads were yelling at me going uphill). I did get to chase a coyote part-way through the race. It jumped out onto the trail in front of me and kept looking back. It was a little disconcerting because I was alone and know coyotes send one of their pack out to lead prey towards the whole pack who then attack all together. Fortunately it turned out OK. The last few minutes of the race are twisty turny and then pretty much straight down. My shoes were no help on the muddy twists and turns and I knew the guy behind me was catching up. I also knew that the final down was pavement and that I could haul ass down it. Good thing I love running downhill, because I had to haul ass! I heard the 4th place guy get right behind me, but I knew I had at least 2 more gears I could shift. I let it get close, then, as we were about 70m from the finish, I shifted into another gear to keep him at bay. I had one more gear if needed, but fortunately I didn’t need it. I only beat him by a second (or less), but that’s all it takes!

I definitely enjoyed the challenge he presented me and I’m sure I pushed him to hurtle towards the finish line a little faster than he might otherwise have run – good stuff. Being new and fresh to me, I thoroughly enjoyed the course and everyone putting on the event was extremely friendly. Fun to earn a “W,” get 3rd overall, and, a few days later, find out I set the course record by quite a bit. Cool! I definitely would like to race out there again. It’s a beautiful area with a couple sections that remind me a lot of some places I ran and raced in New Hampshire in 2009, which brought me positive memories during the race.

Race #3 was 10,000m on the track as a part of the USATF/PNTF Northwest Region Open Track & Field Championships held at West Seattle Stadium. I didn’t decide to do this race until two days beforehand, figuring that racing on the track would be more fun than the tempo run I would otherwise have run on my own at the same time on the same day.

The short story on this one is that I was hungry before we started, it was windy, there were only two women (my friend Kristi Houk and me), and the start got pushed 40 mins later than originally scheduled. None of this set me up for an ideal day, but my plan was to stick to doing a tempo, so it was low-key anyway.

My plan was to run the first three miles at a slower pace, the next two faster, the final mile faster again. Somewhere between miles two and three my left calf started to slightly cramp up, so I slowed the pace a bit and decided to run the first four slower with the final two faster. Slowing it down calmed down my calf and, fortunately, I didn’t feel it again during the race. The final two miles I did speed up and it felt good to do so. Kristi lapped me with about 8 or 9 to go and I used that opportunity to stay with her. The faster pace didn’t feel any harder and actually felt better on my legs. So we ran together for the final two-ish miles and then I ran my last lap a little faster and on my own.

It was a good mental experience to be on the track for 25 laps again, especially with no incentive (no time goal, no real racing, etc.). I’ll state that I was 2nd, rather than last. It simply sounds better and, technically, it’s true. I even have a medal that proves I was 2nd at the Championships.

Race #4 was the Cougar Mountain 8 Mile race – one of our own! I haven’t run this in quite a few years, back when it was 7.5 miles, but I’m extremely familiar with the trails.

The race itself was put on wonderfully and the runners competing and volunteering were great. I, on the other hand, felt terrible. My legs and body never felt good, I was never able to get into race mode, and I felt so terrible that I wanted to quit many times during the race. It’s only 8 miles, though, and I was in the lead, so I couldn’t very well drop out. (If only Uli hadn’t found me chatting it up with Greg and Phil beforehand to tell me the race was starting in a mere 20 seconds. Seriously though, thanks Uli. I thought I still had a couple minutes until the start!)

My hope with these four races was to go 2nd, 1st, 2nd, 1st and maybe set a CR or two along the way. I think I made those goals happen, despite not feeling well, so I feel fairly good about that. It was important to me to race and get used to what that’s like again. My goal this year is to run a new 5K PR. That’s going to be tough, but I know it’s possible. Now I need to take some time to take care of my body, figure out if anything serious is wrong (and, if so, fix that), get some good training in and really go after my goal. I also need to find a flat, fast 5K to race and have as my goal. I should probably get on that.