The race of his dreams 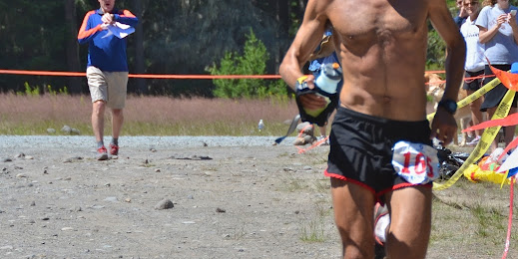 I don’t think a lot of people understand just how remarkable Sage’s race was. Perhaps the following exercise will help.

Imagine a convergence of all of the great ultrarunners, past and present, who have come to White River in their prime: Tony Krupicka, Uli Steidl, Michael Wardian, Scott Jurek, Karl Meltzer, Hal Koerner, William Emerson, Dave Mackey, Chad Ricklefs, Mike Wolfe, etc. etc. etc. Line them up at the start, in your mind, and send each of them off to run the race as well as they ever have.

In this virtual race, as in the real one, the stars collectively hold back for a while. Even the 2010 Krupicka and the 2004 Steidl cover the first few relatively flat miles at a very comfortable 7-minute pace. But there is one exception. Twenty-six-year-old Sage Canaday, whose ultrarunning experience consists of one 50K, is going for it. He abandons Krupicka, Steidl, and the rest without so much as a backward glance. Who the hell does this kid think he is?

As Sage reaches the second aid station — Ranger Creek, less than a quarter of the way through the race — his lead has become an affront to the ultrarunning royalty behind him. Even after correcting for changes to the 2012 course, he’s 10 minutes ahead of Krupicka and Steidl.

Surely the kid will pay for his overzealousness … and yet he doesn’t. By the Buck Creek aid station, 27-plus miles in, he has extended his gaudy lead over the field: 12 minutes on Krupicka, 16 minutes on Steidl, etc. The race is only half over, yet Wardian, Jurek, and company have already been made irrelevant to the question of who will win.

In the second half, Krupicka closes slightly, but it’s no use; Sage’s lead is too big. He beats Krupicka by 9 minutes and 19 seconds, Steidl by 16:33, and everyone else by over half an hour. The 2010 Greg Crowther is thrilled to finally break 7 hours in his fourth attempt, yet has been beaten by a full 42 minutes. He can only shake his head in wonder.