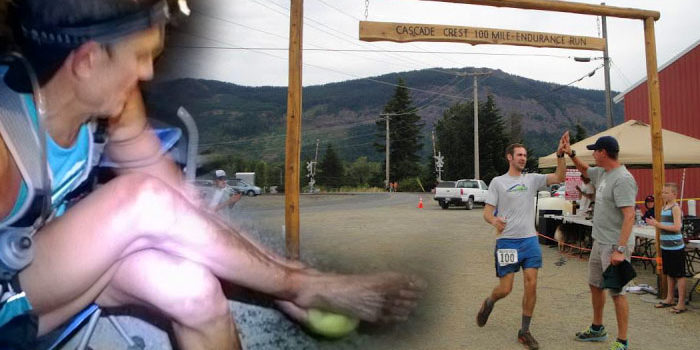 I don’t know if I’ll ever run a hundred miler. (Oh yes, I should mention up-front that despite the post title, *I* learned no lessons at Cascade Crest this year. At least not first hand. But bear with me.) I admit the allure of triple digits appeals to me, because unless you’re Yiannis Kouros, it’s pretty much the final frontier. And since the absurd idea of running 100 miles at a time first occurred to me a few years ago, I figured the most likely venue would be the central Cascades of this beautiful state (read: nearby) and the Cascade Crest 100.

That said, I bailed on a wimpy little 50 miler just over a month ago because I felt overwhelmed by the effort it would require, so who really knows how or when I’ll obtain the huevos to double that distance PR.

I do know that if I ever *do* get the courage, I have recently received three very thorough and entertaining guides on what I can expect. SRC members Martin Criminale, Angel Mathis, and Tim Mathis (no relation unless I’m wrong…? Win can you double check this before taking it live? And if they’re not married can you get me Angel’s phone number? Thanks! Also please delete this before taking live that would be embarrassing! ;p) all ran their very first hundred miler on August 24th, all at Cascade Crest, and all published imperative information for anyone wishing to do the same someday.

A lot can and will go wrong when you start talking about running for 20-30 hours in a row (or so I’ve heard). If you yourself are also weighing the risk/reward ratio for this ridiculous endeavor, I advise you to perhaps bookmark these three race reports, if not find a talented tattoo artist and have our SRC friends’ new wisdom permanently secured to your arm.

On Low Points
Everyone I talked to said, “Dude, it’s not if but when…” All that talk kind of scared me. Subsequently at the start I was trying to ’embrace the journey’ as they say and take on whatever was thrown at me. Mile 20 came and went, no low point. Mile 40, still no low point. Mile 54, no low point. Heck, on No Name Ridge at mile 80, STILL NO REAL LOW POINT. Then came the climb up to Thorpe Mountain (mile 83); without realizing it I was suddenly practically on my hands and knees. My power hike had turned into a survival hike and I had to stop twice to literally put my hands on my knees just to conserve strength.

That was when I had my first gel. And half a mile later when I got to the Thorpe Mountain aid station I had another. And a cup of Coke. I chased this with the contents of my last wrap and threw the tortilla into the trash. Sometimes you just need to do what works even though I knew it was the beginning of the end for my stomach. I guess I figured that making it through this bad patch and not being able to eat solid food for the remaining 15 miles was better than loosing an hour or more and only maybe getting back on the solid food. I think it was the right call.

After Aggie handed me and the tutu off to Alicia, we were on our way for a little bush wack and a treacherous stream crossing that on legs that had run 68 miles at 2:30 a.m. didn’t seem all that dependable. One of the first things Alicia said that I remember is “Check this shit out” as she flashed her brighter-than-the-sun flashlight. This made me laugh the moment she said it, surprised me when I saw how bright it was, and came as a great comfort to me later on the section of the trail known as the “trail from hell.” It has this reputation because it is extremely technical, has log crossings, a lot of rocks and roots to trip on and drops right off the side into a lake so if you trip, your life could be in danger. The race director, Rich white, reassured the runners that the only person who had ever fallen off and swam to safety was a person who littered on the trail. I was sure not to litter! I made a rookie mistake on this section of the trail and forgot to grab the spare set of batteries packed away with my crew. My lights were becoming dim, but with Alicia’s light, we had no worries except for the long shadow that cast from my feet covering the trail directly in front of me.

Even with a friend driving us back, the car ride back to Seattle was excruciating, with knee tendinitis bothering me more than at any point during the race, and muscles, realizing that they could relax, locking up and generally taking the opportunity to protest what I’d just subjected them too. We made it home though, and as I was showering Angel came in and announced that she’d finished making her “nest” – a pile of pillows on our bed surrounded by drinks, bags of chips and a lap top. “That’s where I’m going to spend the next day.” From the nest we ordered some Thai food, updated our Facebook statuses, and fell asleep at about 7:30. Today my legs are as sore as they’ve ever been, our house is still trashed with drop bags, and I can’t bring myself to do anything requiring physical exertion. But I’m happy, and pretty darn proud.

Pictured at top: Martin taking care of feet in the middle of the night, which I’ve heard is a popular ritual in hundred milers; Tim successfully finishing…also a popular ritual.