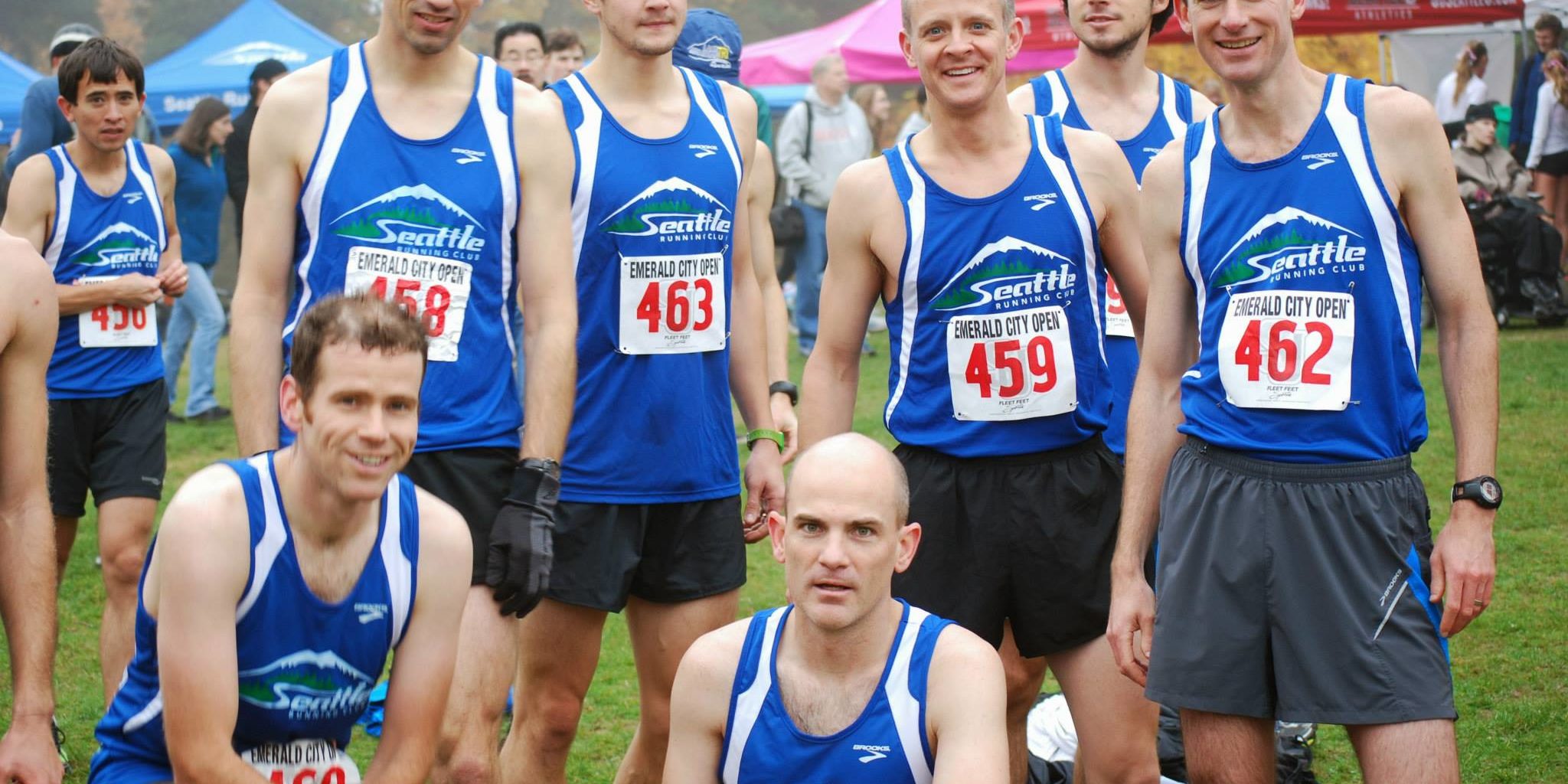 Is a picture worth a thousand words? “No, of course not, what a silly question,” is how you would surely answer, if I had the courage to speak to you face to face. It’s what I thought as well, until I saw a particular team photo. A recent SRC team photo. You can see it above. It is the Seattle Running Club mens team at the Emerald City Open. Lower Woodland Park, October 19th, 2013. I think there are a thousand words going on up there easily. It starts and ends though, for me, with irrepressible laughter. In a way it’s not fair of me. We’re still waiting for the big guns to fill out the rest of our roster. The Steidls, Crowthers, Boyds, Lavertys, Barkhauses, etc. This team is and will be much better than that day a week ago when I was its 2nd finisher. Most likely at the very next race, PNTFs, on November 3rd a the same venue.*

This is my first time running XC since high school, and I’m having a great time. I love SRC and everything we stand for. I love our colors. I love our logo. I love the multitudes of disciplines and interests you can find within our club. And it’s a fun thing, once again being part of a team. Lining up next a bunch of determined guys, patches of matching jerseys making up the start line’s rainbow. Everyone’s ready for that burn. You all suffer together. Afterward you find yourself accidentally cheering for Patrick Niemeyer as he comes down the home stretch, simply because he’s wearing the same blue singlet you are. The singlet bonds you to others, if only for a race. Team photos like the one above though, those bond you for life.

While chatting with Patrick, I asked if he’d help me describe the feeling of bemusement (and helplessness) I feel when looking at the photo. He was less than helpful. 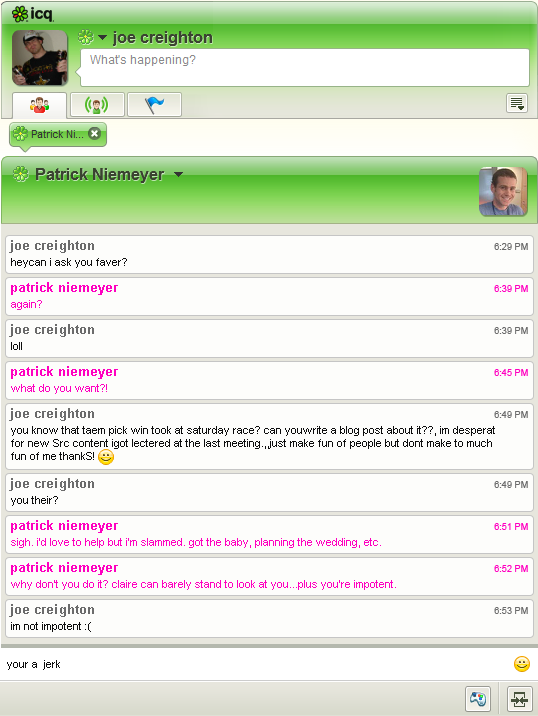 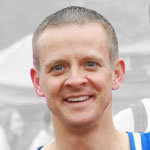 We’ll start with the team’s leader this day. I have literally never made eye contact with Destry since meeting him 20 years ago and NOT seen this exact face. Coupled with his hair that is surely made of a special kind of plastic manufactured in China, I’m 25% sure he’s a robot. Is it legal under USATF rules to have a robot running for us? Let’s hope so because Destry Bot 3000 will always crush me and this team needs him. 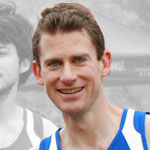 Lance and I go way back. I’m proud to say he almost took me to prom one year. He’s a great runner and a nicer guy you’d be hard-pressed to find. That all said, Lance is looking more prepared for the JC Penney photoshoot he’s apparently got scheduled than he is for the impending 8k. 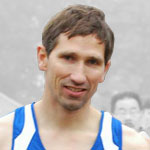 I met Mark about 45 seconds before this photo, which should be obvious given his slumped shoulders and defeated expression. I’m confident Mark will more easily tolerate me as we get to know each other. If he’s reading this, this blog post is probably a good start! 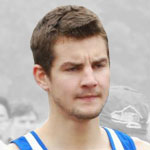 Evan has great hearing, as far as I know (which, well…I don’t know very much about Evan. But I’m pretty sure he’s not deaf), so I’m sure he heard Win’s call for a team picture. He must be distracted though by the dog just out of frame that, considering the look on Evan’s face, is defecating on an American flag while somehow flipping him the double bird. 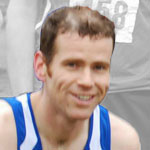 As you can see from his blurriness, Patrick was still getting into position for our photo. What you can’t see is the waft of B.O. gently passing by my nose seconds later 🙁 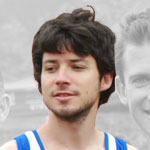 Fresh from Argentina, Guillermo was a surprise new racer for us. In addition to running fast, it appears Guillermo is not wasting any time in his mission to put us all out of our misery and take out Patrick Niemeyer. Godspeed, Guillermo. 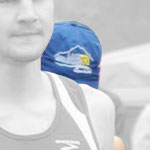 Cliff wasn’t our fastest male runner this day, but, despite what some people allegedly think of *my* age, he was definitely the oldest. To his credit though, he displays a wisdom I can only hope to obtain as I grow older: the ability to see trouble brewing before anybody else and wisely hide everything but his hat from Win’s camera. Well played Cliff, but I know that’s you. 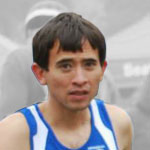 Hopefully by this time a week from now I will, but at the moment I have no idea who this guy is. I do know he ran with Erik Barkhaus’ bib number, which it seems he’s putting on in the photo while hustling to the start line. So I suppose in the meantime I will refer to him as Erik. He did whip Patrick’s ass during the race, which makes him alright in my book. 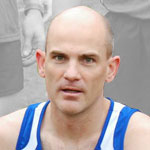 “Win, can you wait 10 seconds so I can apply my fake tanner? No, you’re going to go ahead and take the photo anyway? Well just wait all I need is 4 secon–”

The obvious first idea I had for this photo was to print it poster-size and hang it above my bed at home. That idea was nixed though by an unnamed party.

One idea was to perhaps milk this photo and get some free product out of the deal: 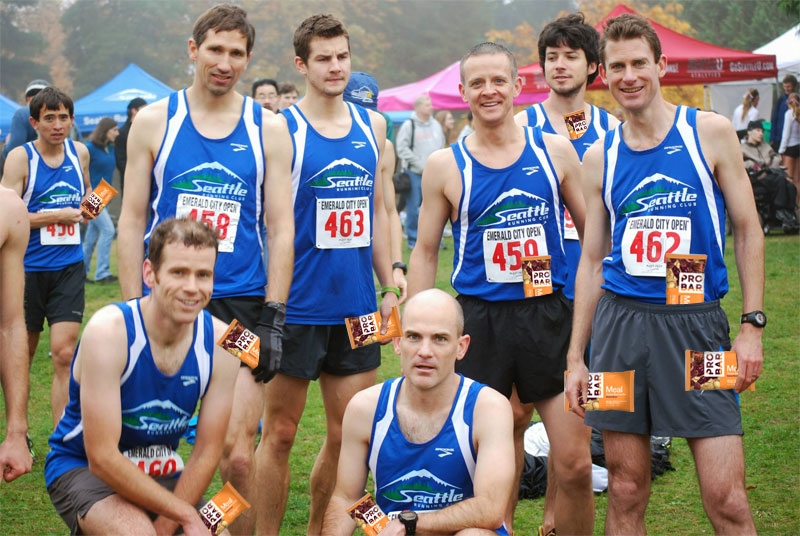 “I don’t know about you guys, but my favorite pre-race snack is a delicious ProBar™ and as you can see, my teammates agree! Thanks ProBar™! #Probar™ @PROBAR™. I also enjoy ProBars™ immediately after races and once in awhile during races! Thanks again ProBar™!”

That idea was a dead-end though; my letter was returned unopened. 😐

I thought our friendly “rivals” Club Northwest could perhaps use it as a promotional brochure: 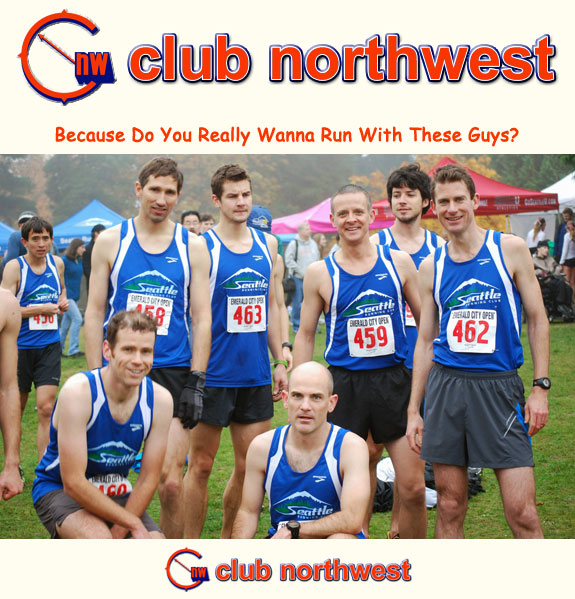 It’s been four hours however and I’ve yet to hear back from them.

Finally, I just went with my first instinct upon seeing the pic. It took me over 1000 words to get to the point, but here it is: 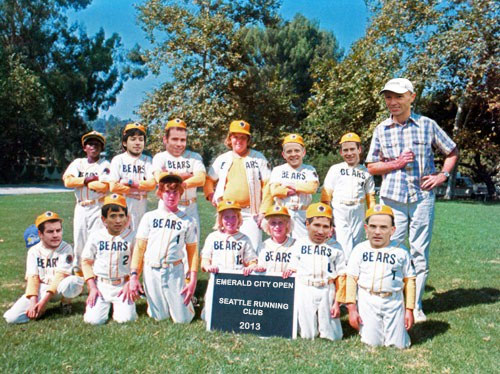 My brothers and I look like the Bad News Bears, and I couldn’t be prouder to be among them.

“And another thing (Club Northwest), just wait til next week!” 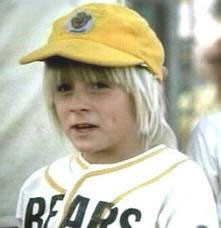