#SackLunch at the 2015 Bend Beer Chase 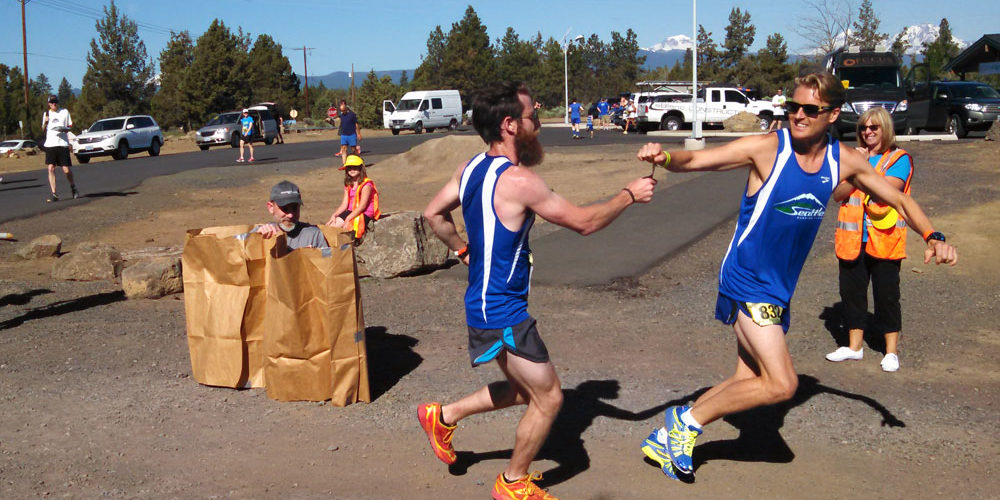 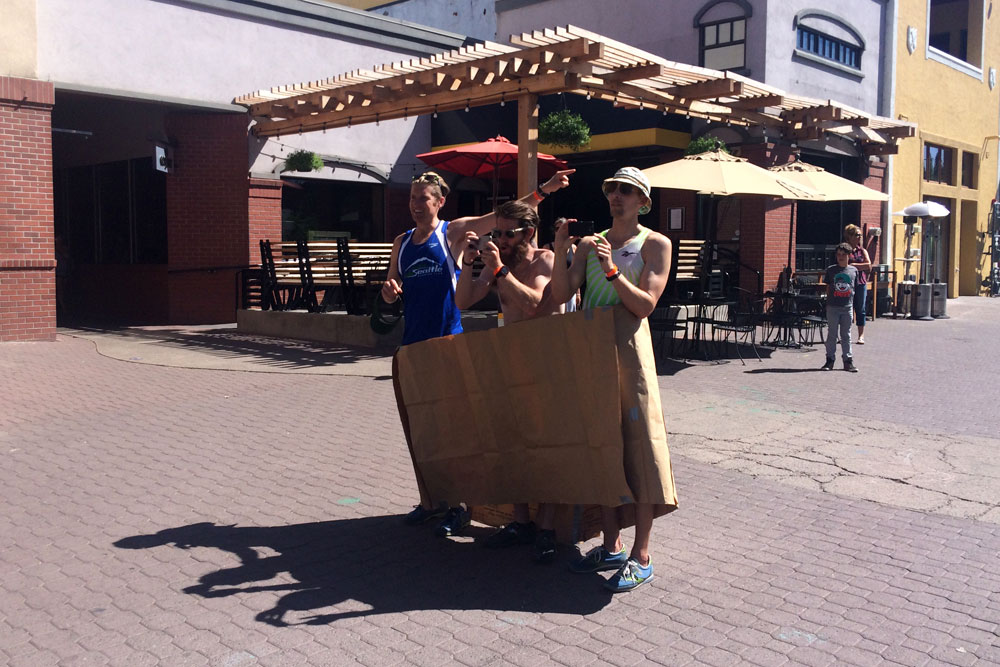 The 2015 Bend Beer Chase. Seventy miles of Bend’s most beautiful high-trafficked roads, hopping from brewery to brewery in a magical land that, based on their lush green lawns and heavily-sprinklered sidewalks, seems not to think much of our region’s drought woes. 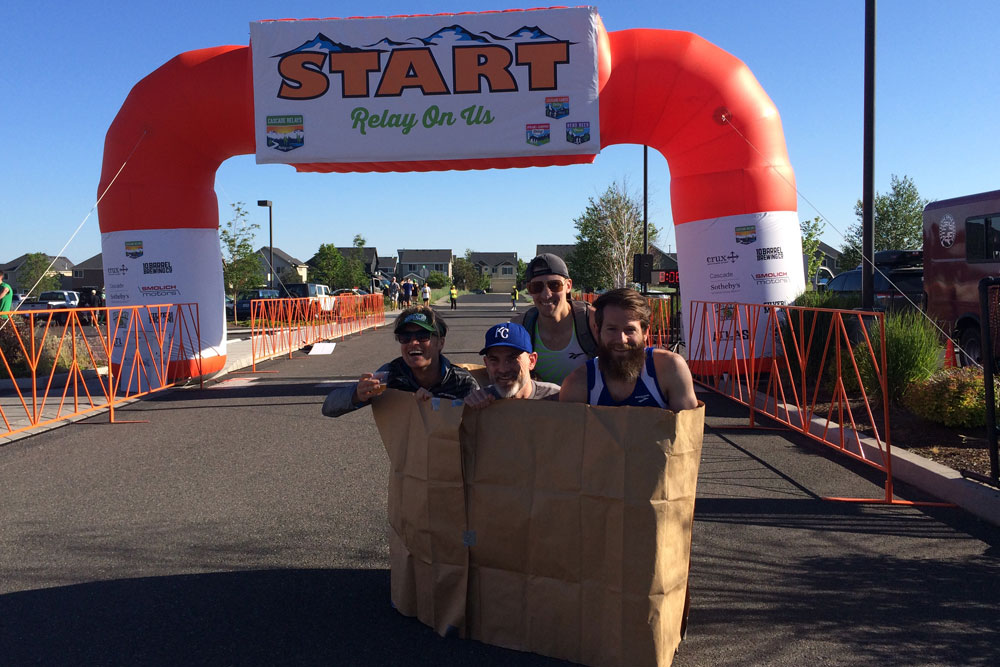 Olin Berger (left) proposed this race awhile back and I jumped on board once I got the scheduling worked out. Derek Reiff (good beard) is always up for a good run. Brett Walton (Cochese glasses) is somewhat “choosy” when it comes to racing and didn’t want to run but said he’d drive us around, and Evan Williams was too busy planning on setting his 3rd PR in a month back in Seattle. This left the three of us to complete the 12 leg relay race, each running four legs and finishing with anywhere from 21-24 miles apiece. Not ideal (most teams had six members running two legs each) but eh, whaddya gonna do. 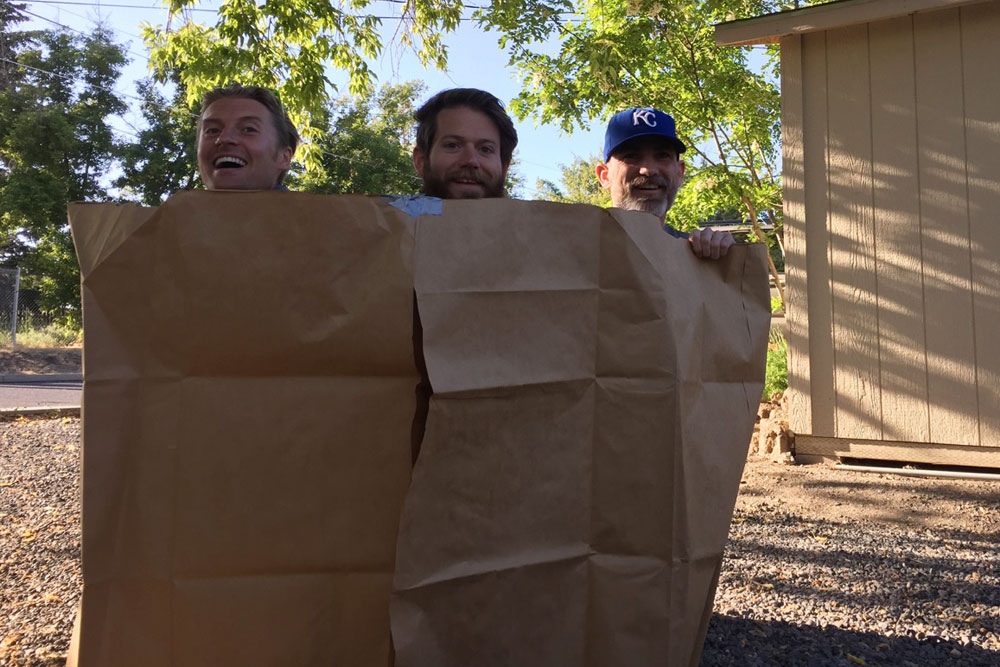 The team name was another matter and I don’t remember any of the story behind it, other than we’re all huge Seinfeld (read:Elaine) fans and I think Olin really wanted to get bags from Fred Meyer and make a huge “sack” for us to appear in at check points, the start+finish lines, the after party, the AirB&B driveway, and other general public areas of interest in beautiful Bend, OR. 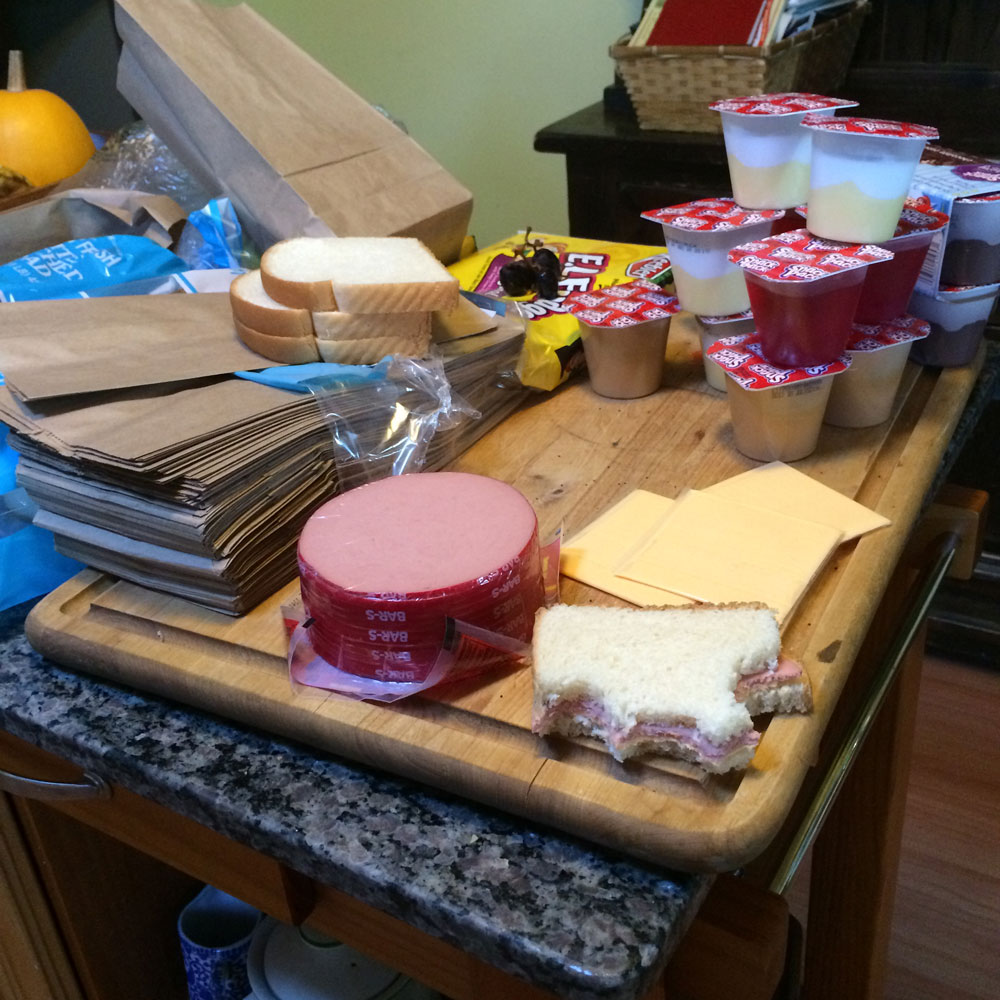 The evening before the race we stopped in Redmond and Derek finally found the $1.29 baloney needed to complete our lunch supplies for the rest of the field. We would make a bunch of brown bag lunches with actual “edible” lunch items (baloney sandwich and snack pack) and offer them our to opponents in an attempt to pysche them out bribe their friendship. The woman checker at the Grocery Outlet was named Capriola and another was named Baylea, and in case either of you are reading this, Derek is single and easy to get ahold of. We promise he did not consume (much of) the baloney you saw him purchase. Just before we entered the store, we found out Evan ran a 15:46 5k and completed his PR trifecta! Motivation levels +3! 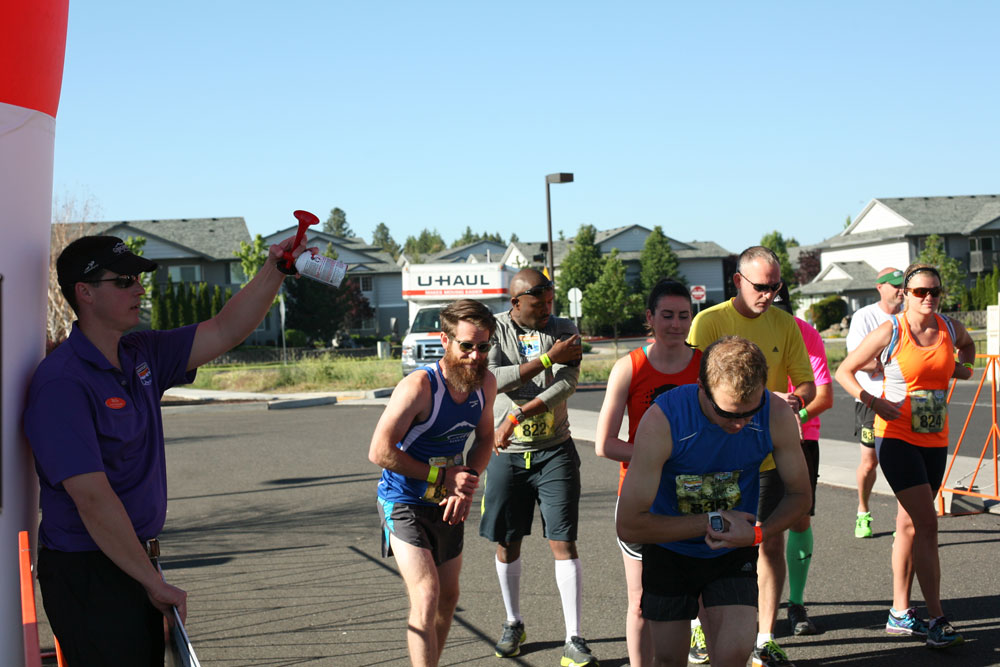 The goal was to hit last year’s winning time and if last year’s winning team showed up, let’s race! Derek’s stated plan was to go with the leader for the “first few miles” of his 6.47 mile leg and see what happens.
“What if he goes out at five minute pace?”
“I haven’t thought that far ahead.”

(He went out at five minute pace.) 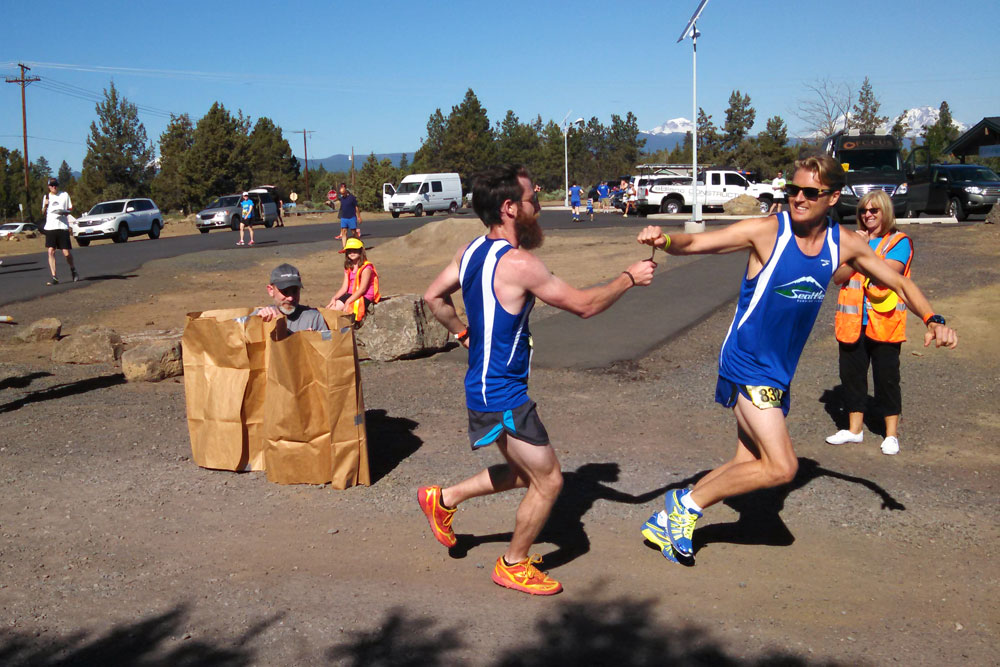 Handoff of the day was, not surprisingly, the very first one between Derek and Olin, when we were only two minutes down on the lead and the future still looked bright with promise. Olin took off for his 9 mile leg on the hunt at what appeared to be ~4:15 pace. It was also here that I started to worry about the heat, considering it was 9am, I hadn’t run one mile yet, and I was already moaning to Brett about how tired I was and could I just go sit in the shade over there? 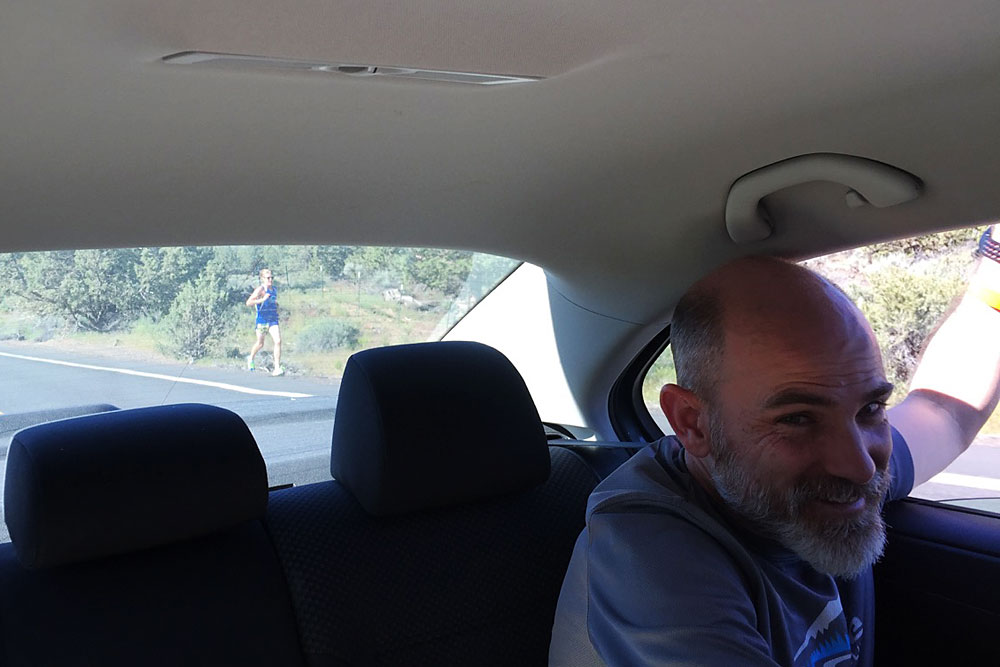 Highlight(s) of the day was whenever when you were done running your leg and sitting comfortably in the cool car while driving to the next checkpoint, seeing your running teammate suffering along the stretch of busy street, and hooting/hollering for him as you passed, oftentimes while holding out a brown sack of lunch and quoting Ayn Rand. Lowlights of the day would be when you yourself were the guy running on the road while your team drove by and away, them holding out sacks and yelling at you to “Run for your life from any man who tells you that money is evil! That sentence is the leper’s bell of an approaching looter!” 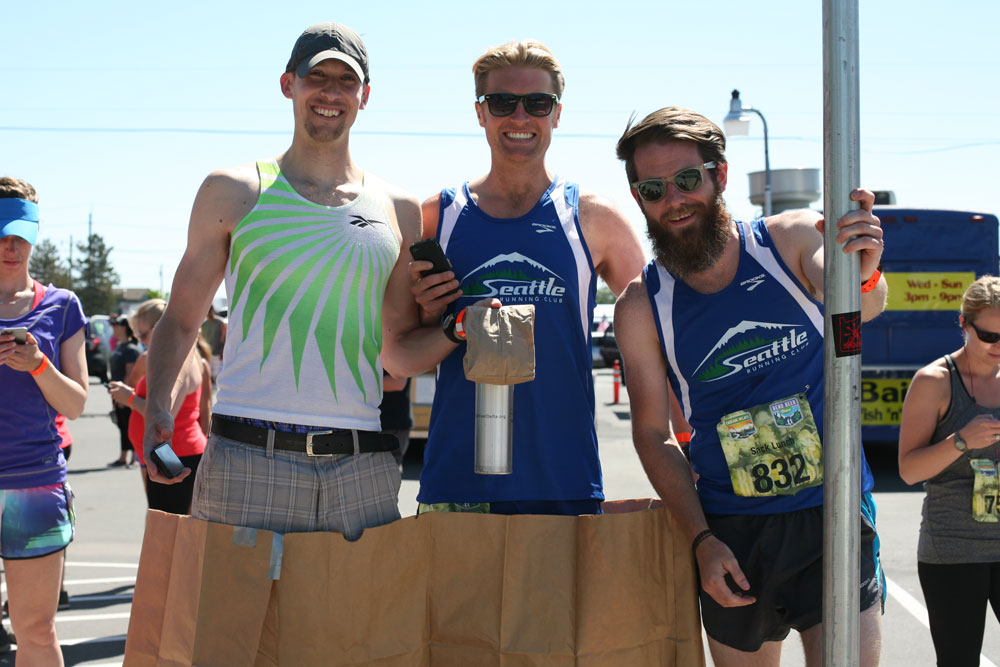 It was mildly amusing that our fittest-looking guy, 73 inches tall in his skin tight Adidas tank top and the shortest shorts seen in Bend all year, was actually our driver who ran zero miles. While his shorter, balder, back hairier cousin with the elephant legs ran 21. 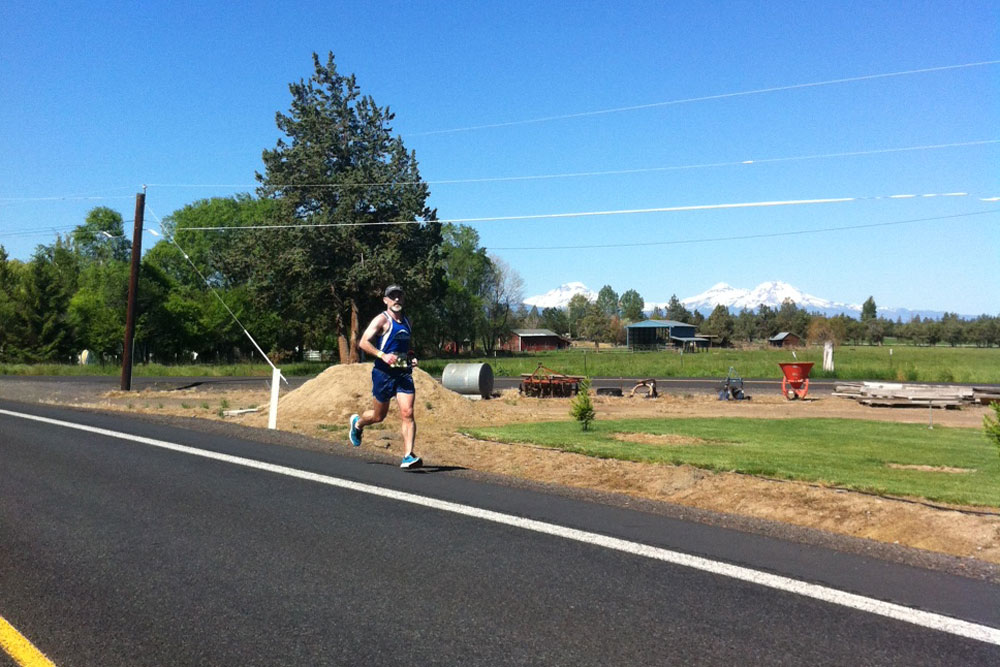 Unfortunately the majority of the race scenery looked like this. You were advised to admire the majestic Three Sisters mountain peaks, which proved difficult when you were mostly concerned with not getting hit by the oncoming Ford Excursion on the busy freeway. 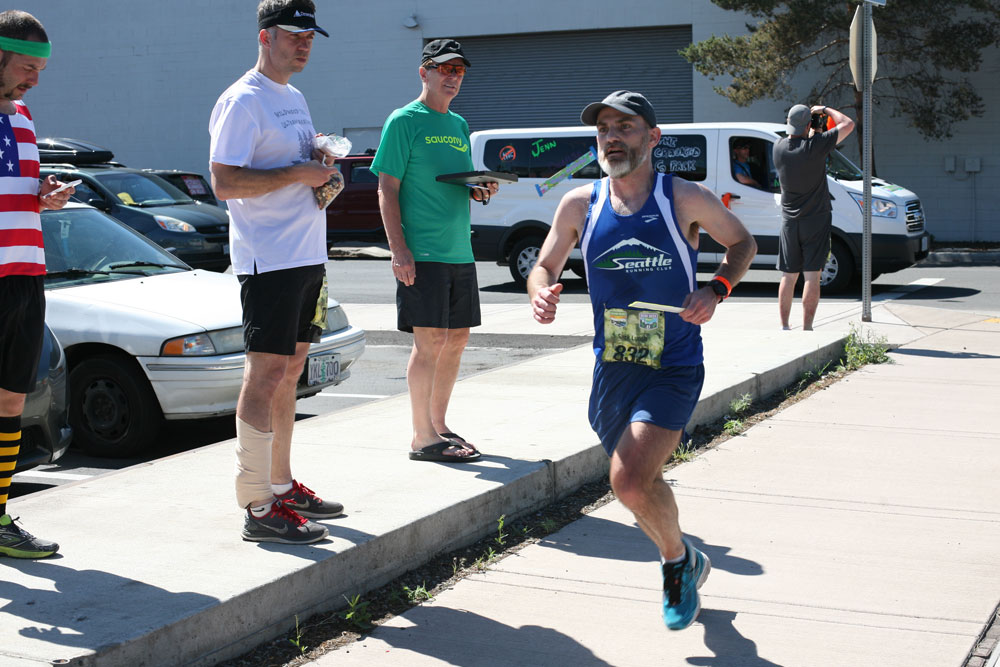 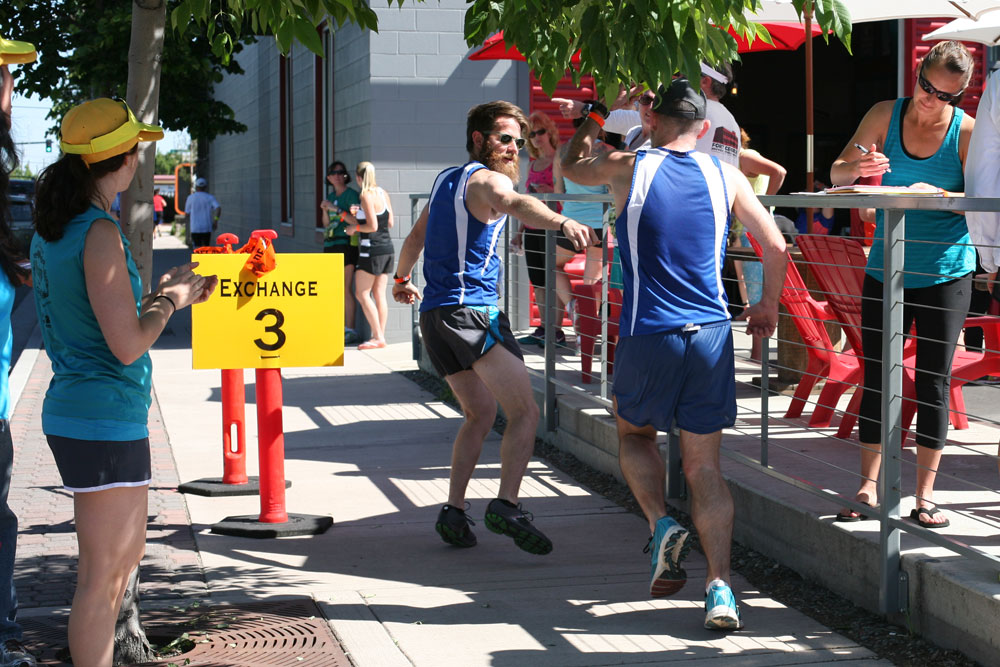 As a team we took pride in at least *attempting* to use the snap bracelet “batons” as god intended them. This worked well and impressed the women initially at the exchanges, but as heat stroke gradually set in, we got sloppy and form broke, snap bracelets falling to the ground like tears from a frustrated child. 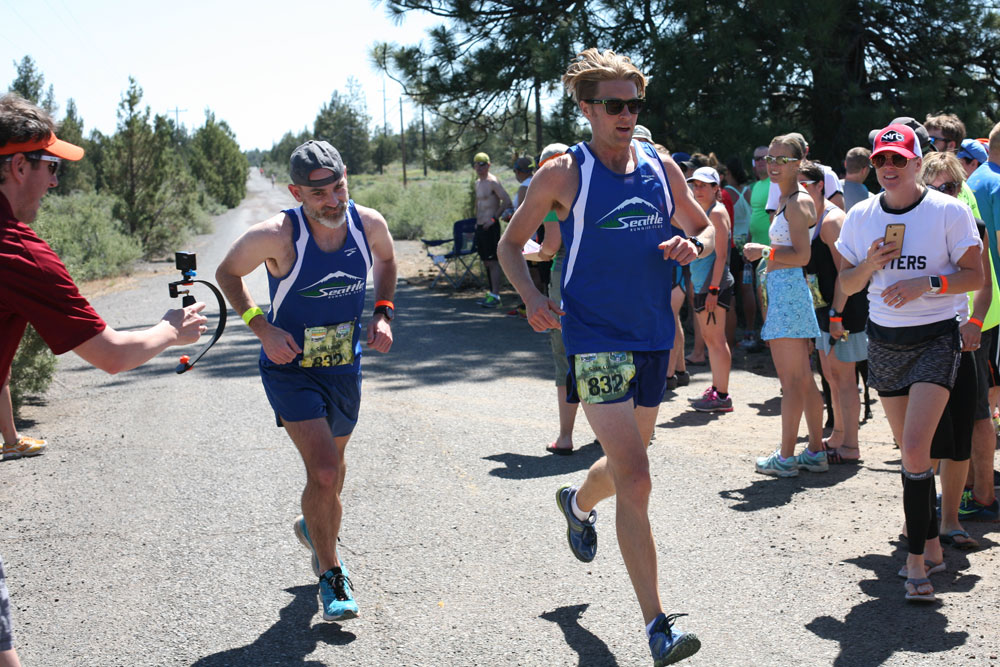 Personally, my hardest leg on paper was my 2nd one (6th in the overall race), a 6.6 jaunt up highway 126 which featured up close & personal views of the many large trucks Oregonians like to drive at high rates of speed. This was probably also the high-water mark for our team on the day, as Olin ripped it and got us back to around 7 minutes off the lead. Fired up, I ran way too fast considering I would only be halfway done upon finishing the leg, and for my efforts we fell 15 seconds further behind. :\ 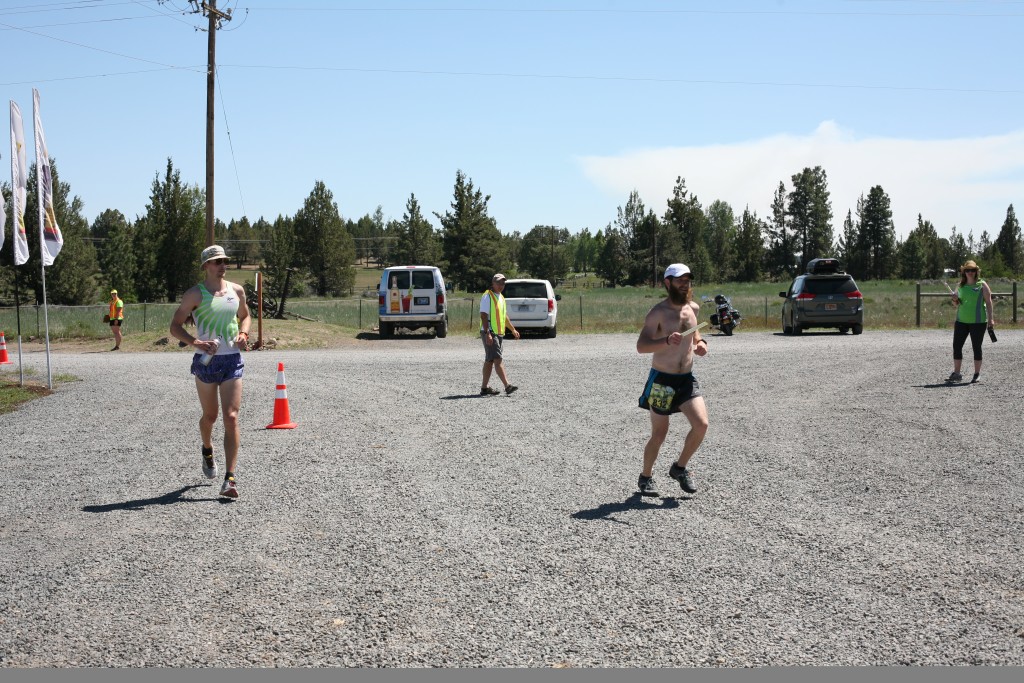 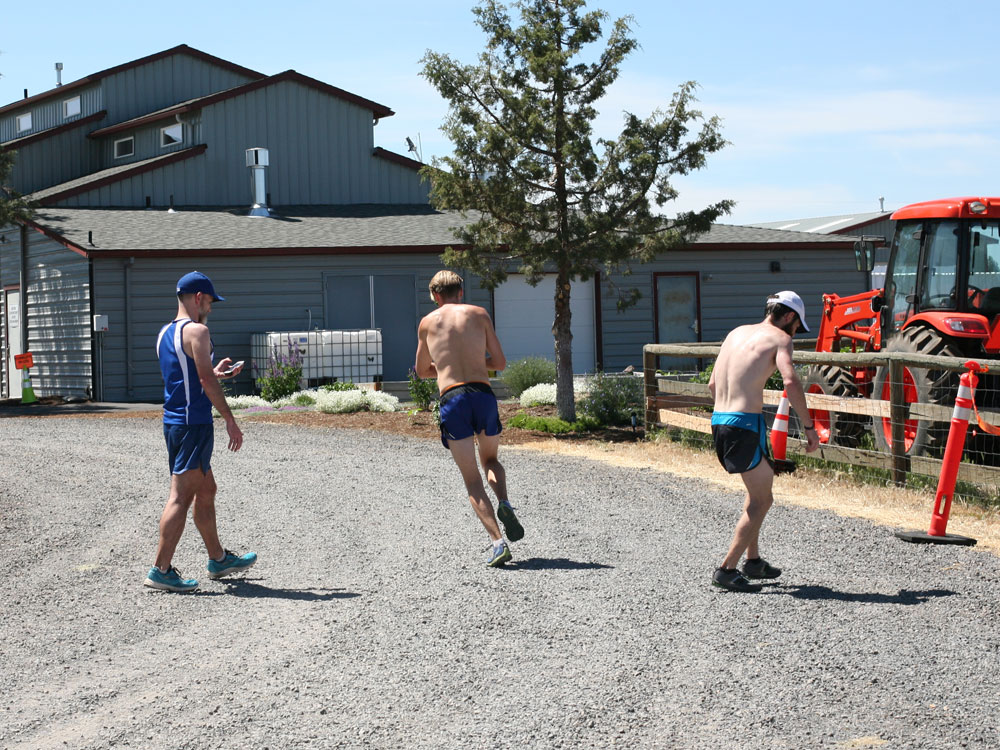 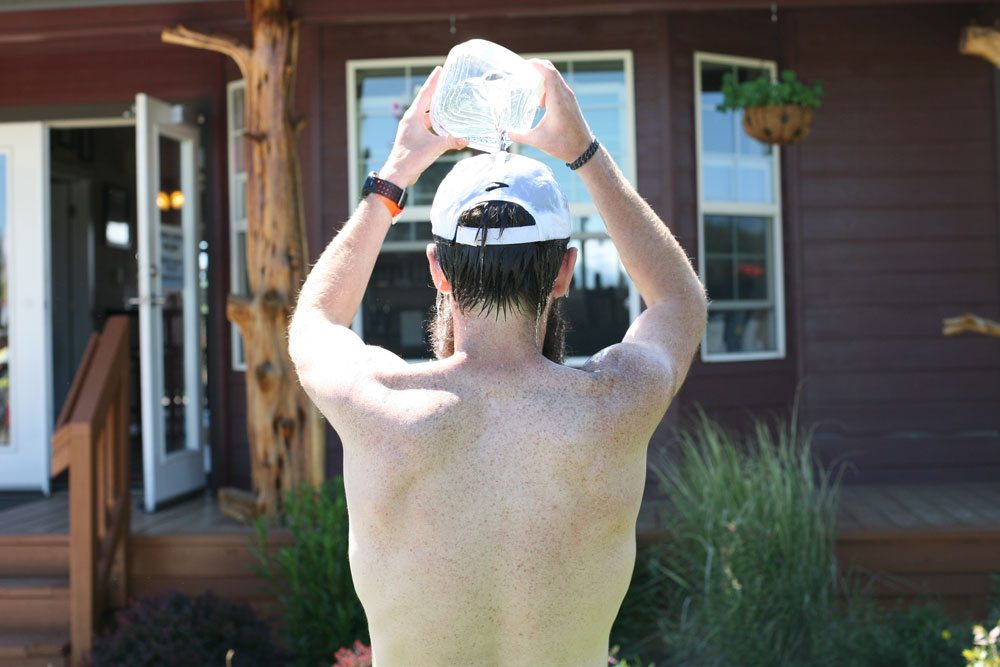 Derek Reiff, shown here completing his 4th and final handoff, showed tremendous courage in running himself nearly to death so that we could ultimately finish 36 minutes behind first place instead of 38. As of this writing, Derek has not run one step since this photo was taken. Worth it!

After that depressing series of photos, here’s a little extra special NSFW shot for the Derek fans, from earlier in the day when things were only just beginning to descend into hell. If the kids have been put to bed, click the image for the full UNCENSORED action! ;p 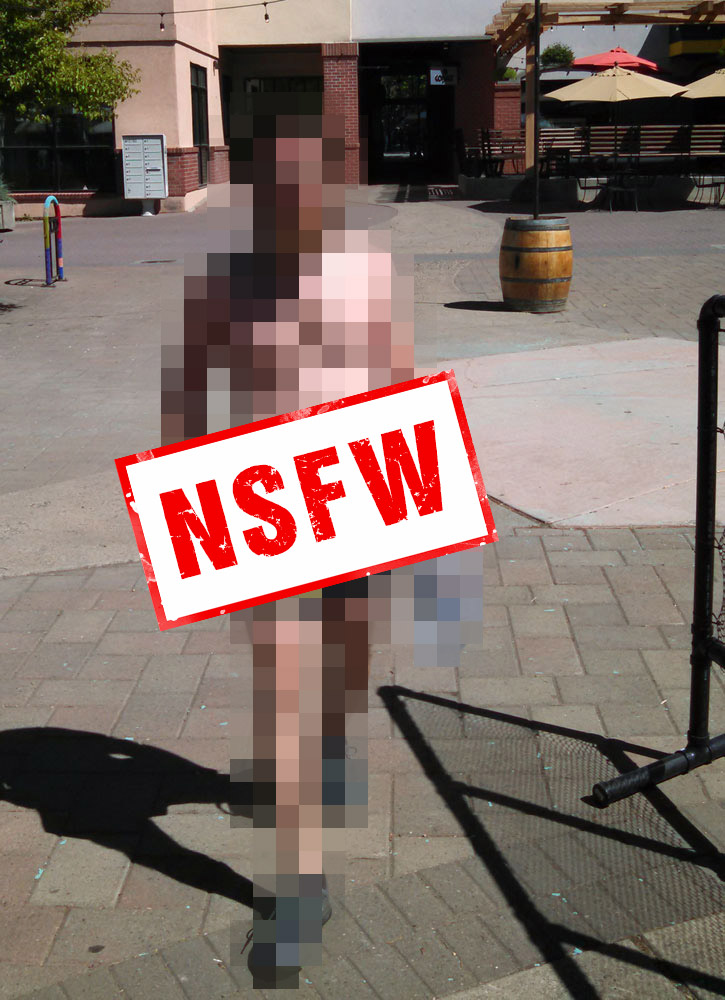 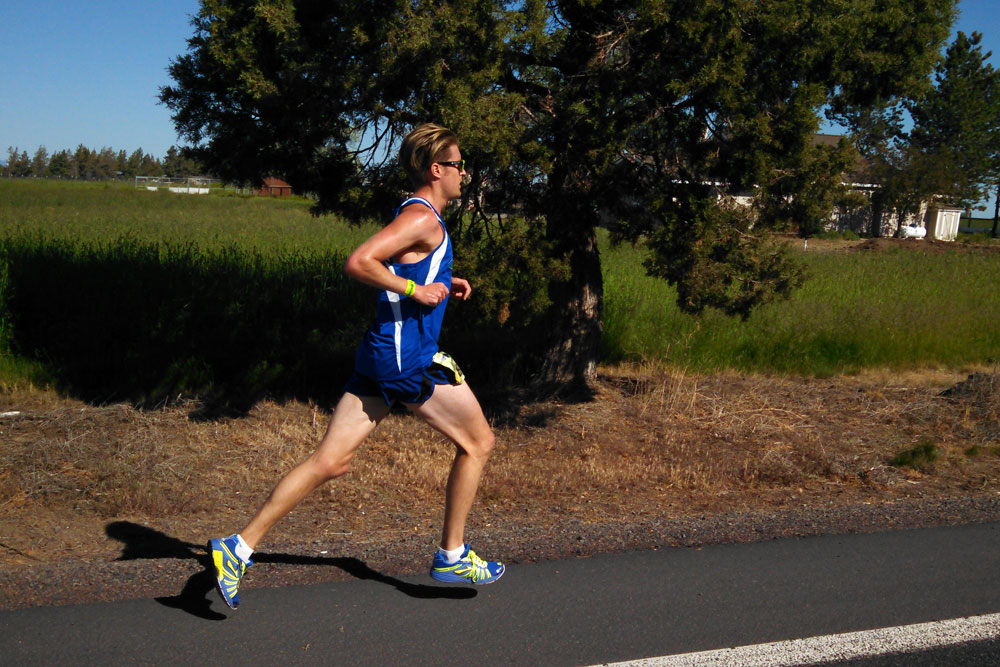 Olin was our MVP and rock for the day. While Derek and I suffered/wilted in the heat and elevation, Olin showed a capacity to just put his head down and suffer. To this day I still do not understand how he held a 6:37 pace for his final 3pm, 6.9 mi leg. I should say that for most of the race, this was the scenery. On the shoulder of a busy road, completely exposed to the worst life has to offer. 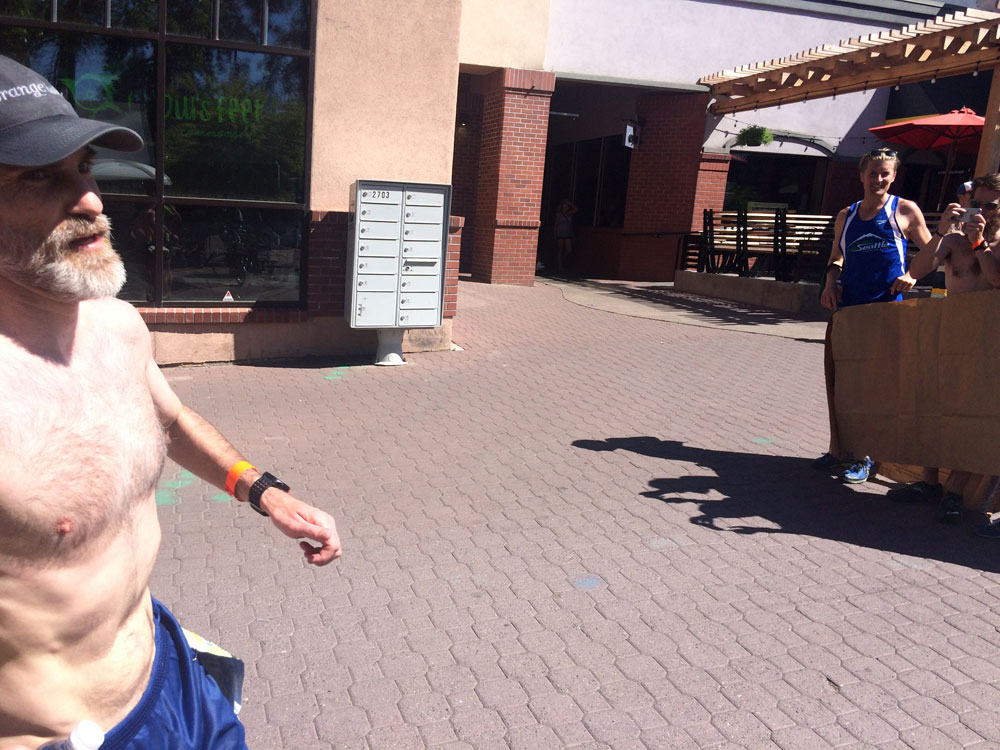 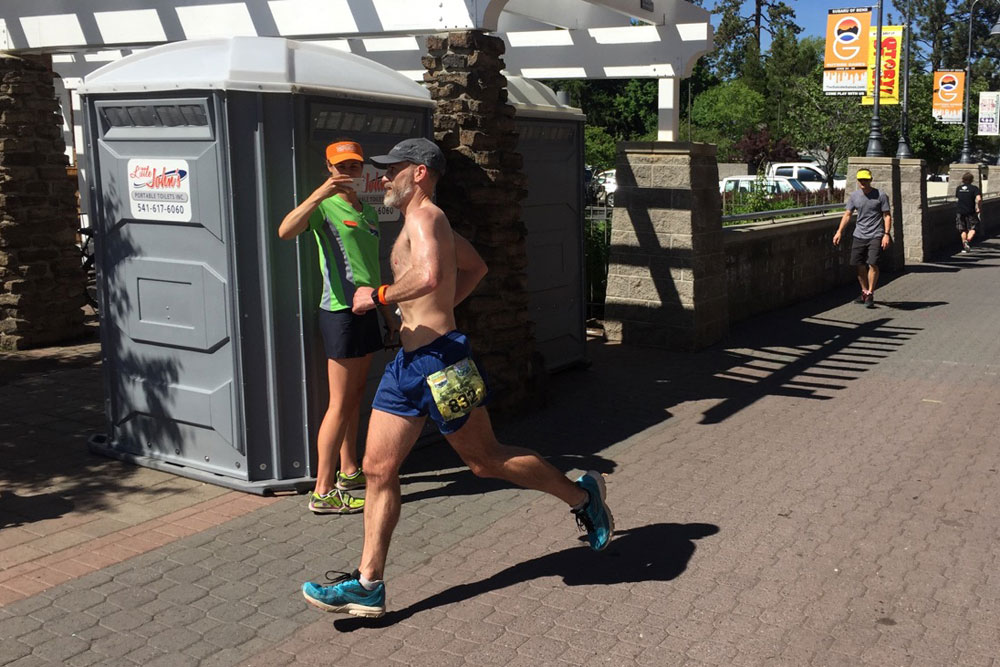 Bend proved to have that lovely southern hospitality during my final 100m kick, during which a couple bros outside a bar heckled me for reasons unknown to me until I saw these finish-line pictures. 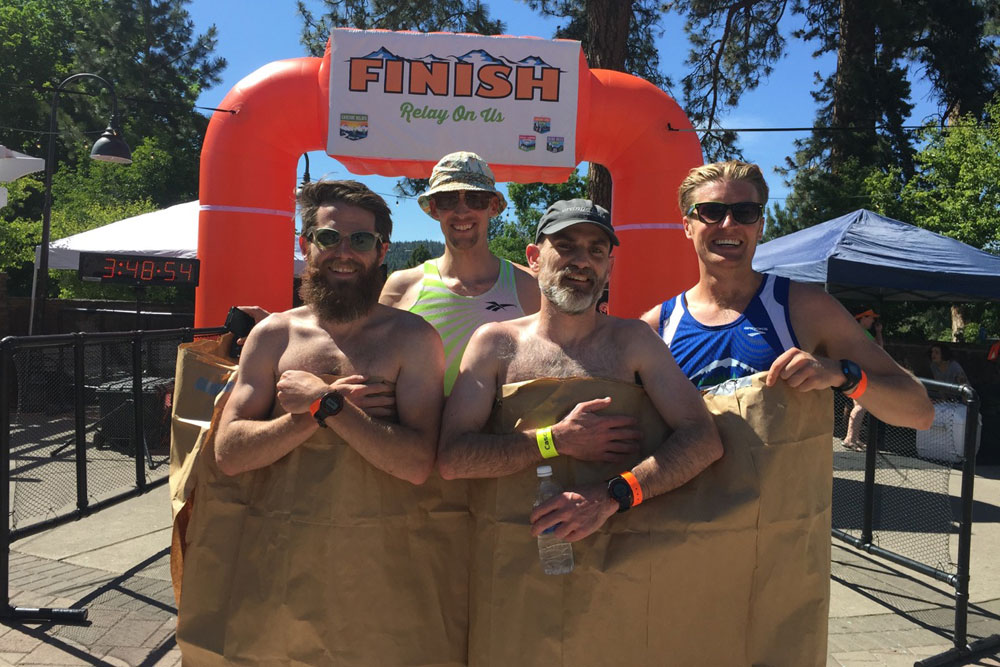 The team that suffers together, appears to also shower together…? 2nd place in 7:26. Thirty six minutes behind the lead team, who were annoyingly 13 minutes faster than the year before. 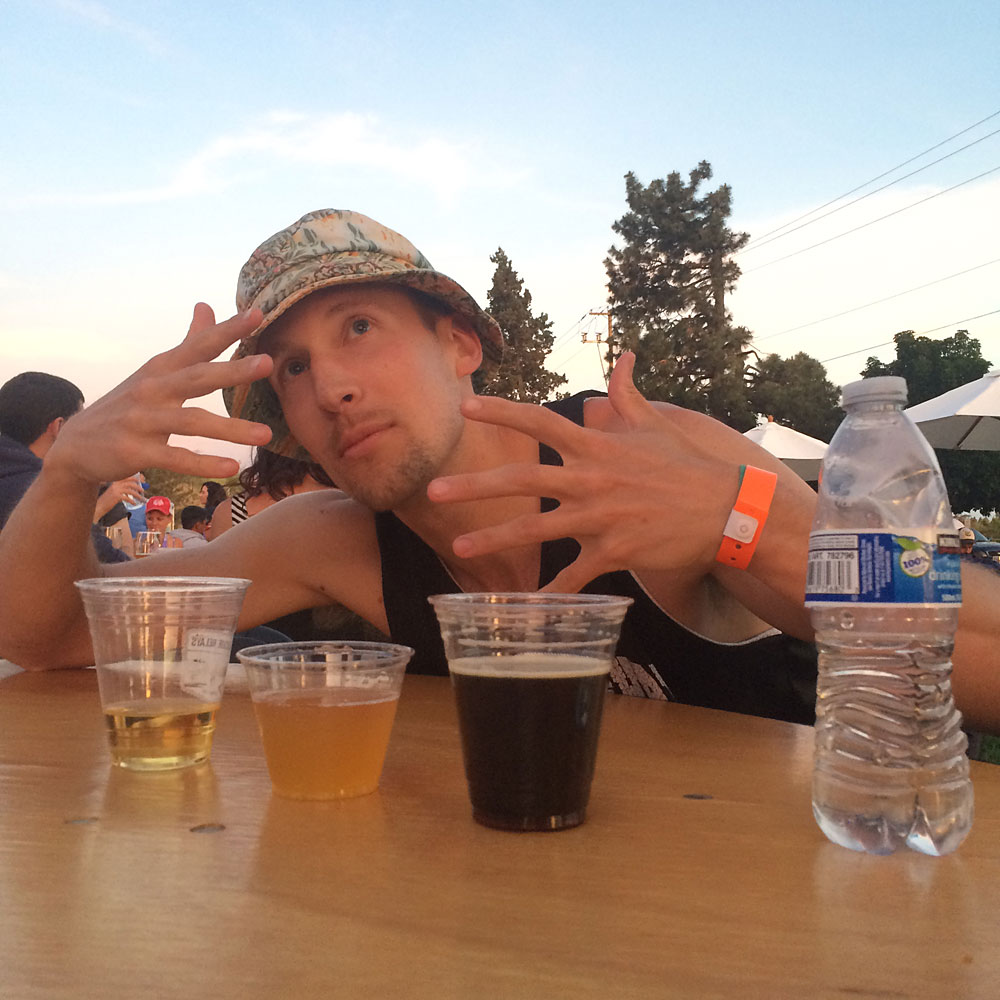 Brett drove us all over Bend that day, took the photo of the day (Derek/Olin handoff) paced a couple of us late in the race when life was its most dire, and was for the most part not very annoying. He doesn’t like beer though, so the least I could do for him at the after party was agree to get him a sample cup of Kombucha and then make a big deal about it. 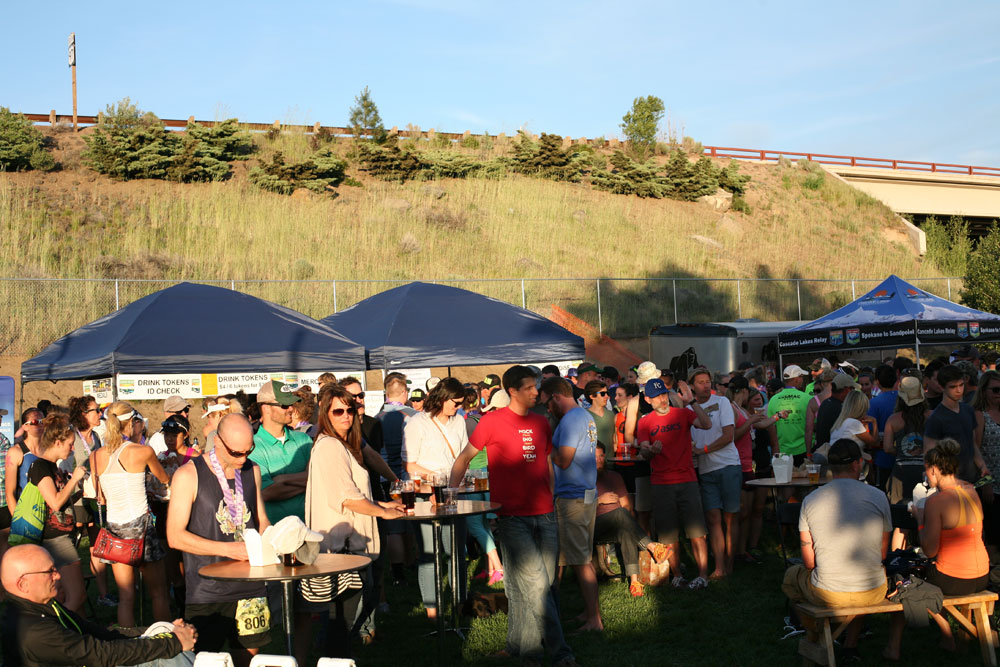 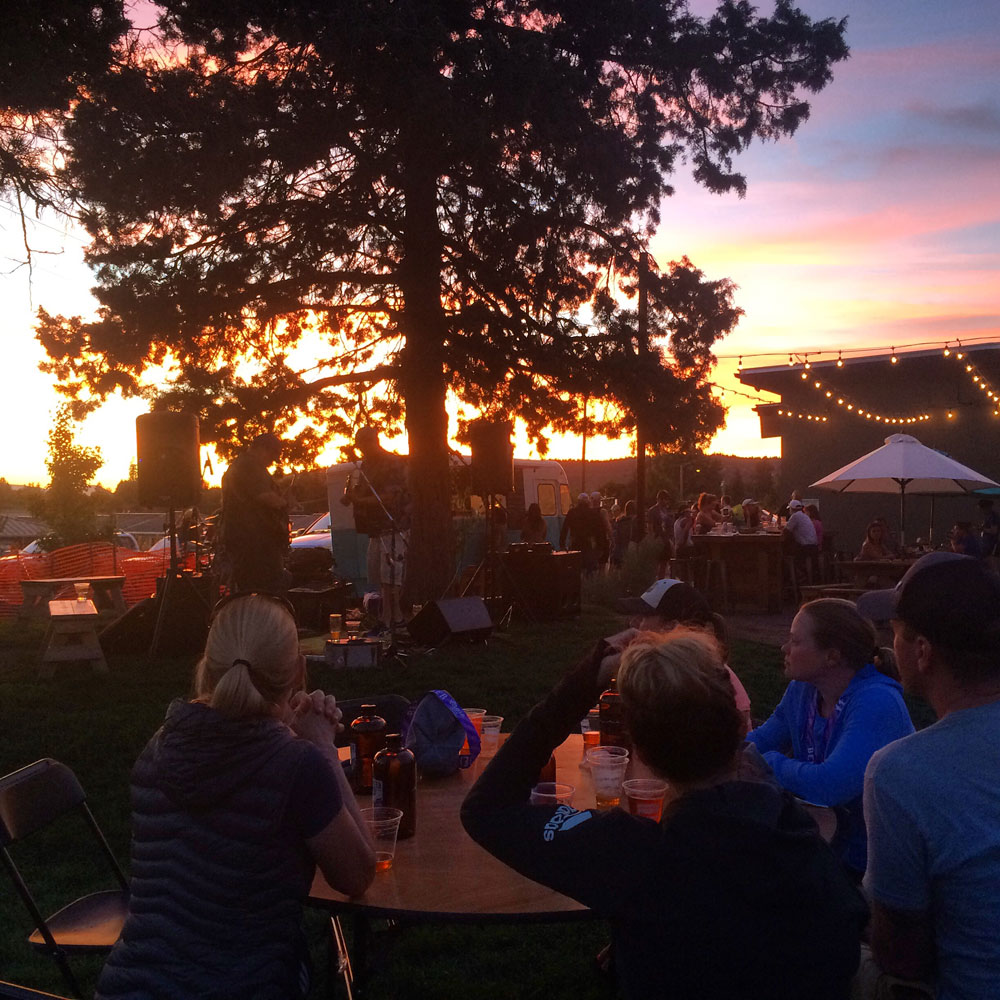 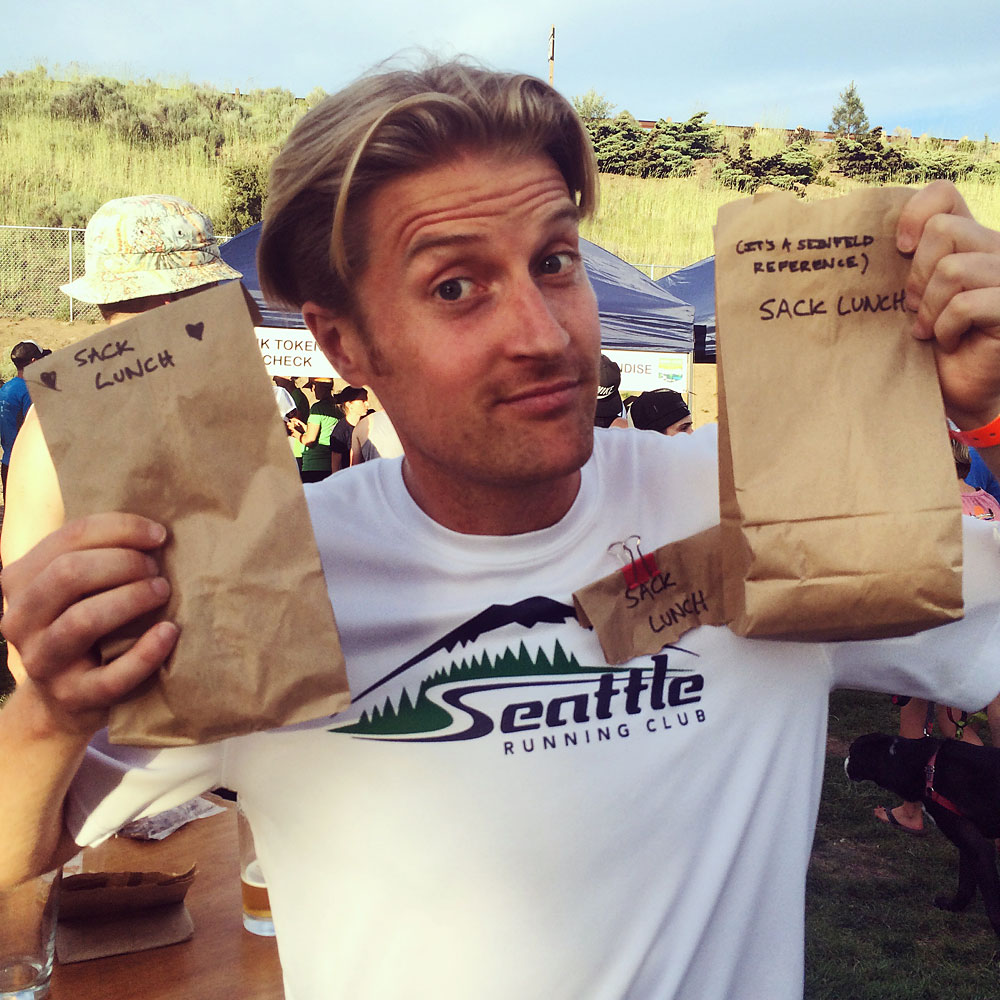 Olin was sad we didn’t win any team-themed awards during the afterparty, and that Derek’s beard not only did not win, but finished behind a guy whose “beard” wasn’t even a real beard. He medicated this sadness by standing in many beer lines and handing out our remaining sack lunches to whomever seemed most inspired and ready to party. A couple witty one-liners later and Sack Lunch are suddenly BFFs with the all-female Hot Messes team. 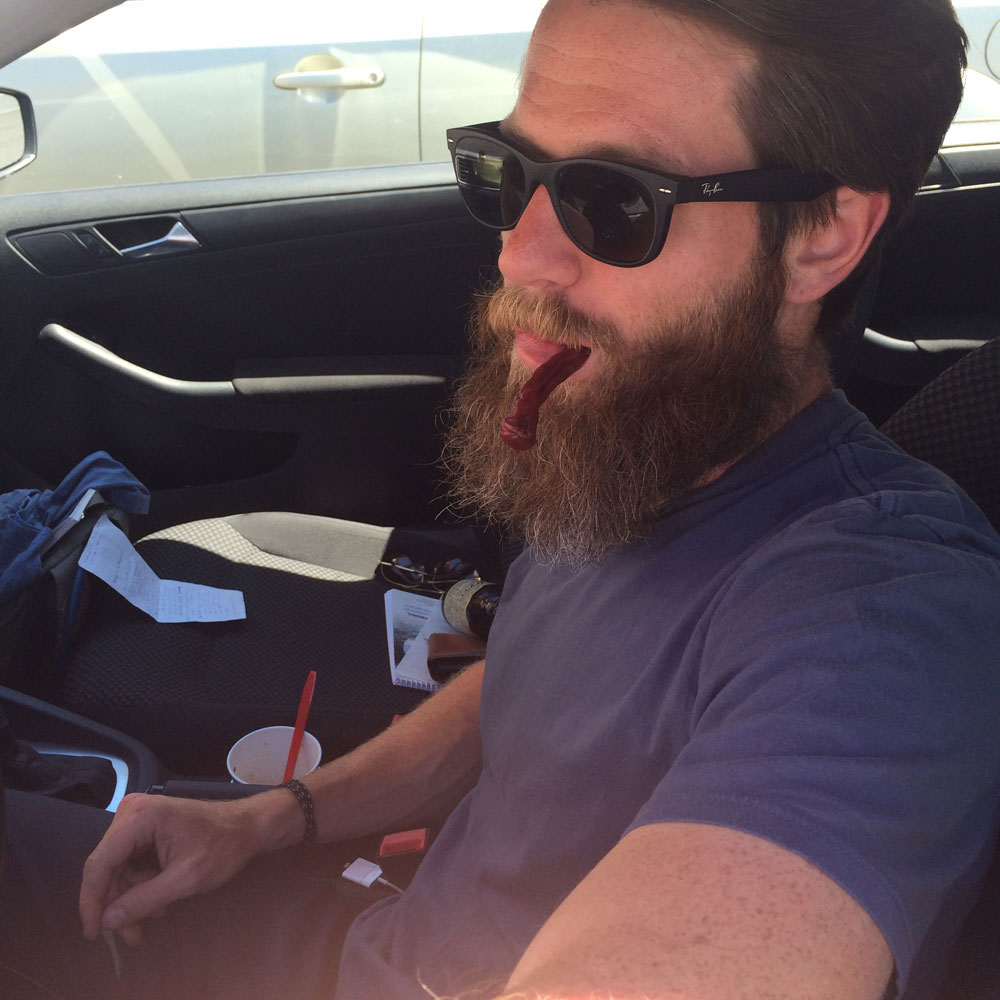 Derek spent most of the post-race festivities throwing up in our host house’s lawn and remaining seated and stoic during the afterparty. He bought a meat stick and actually ate it on the drive back to Seattle the next day, which I thought would raise his moods but didn’t really. Sunday night he stated he has lost those last pesky 6 lbs. 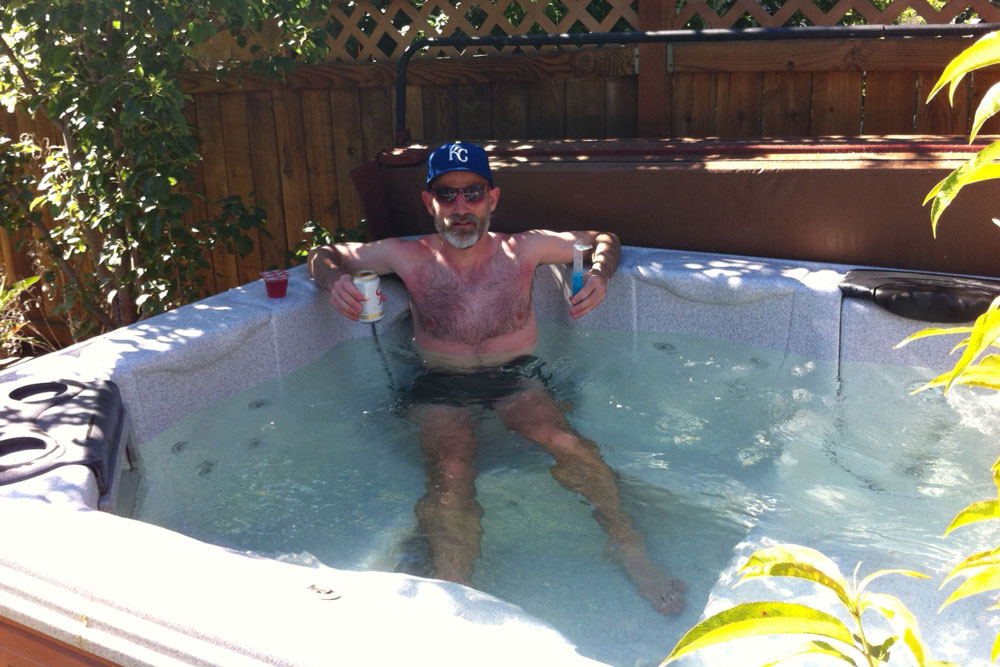 You can’t go to 87 degree Bend and not hot tub it up! Last order of business was achieved after a Sunday morning shakeout run with Brett and Olin. I decided blue was the best otter pop flavor.

It’s been real, Bend. Real hot. Next year we’re bringing six, and one of them has bigger calves than Max King.