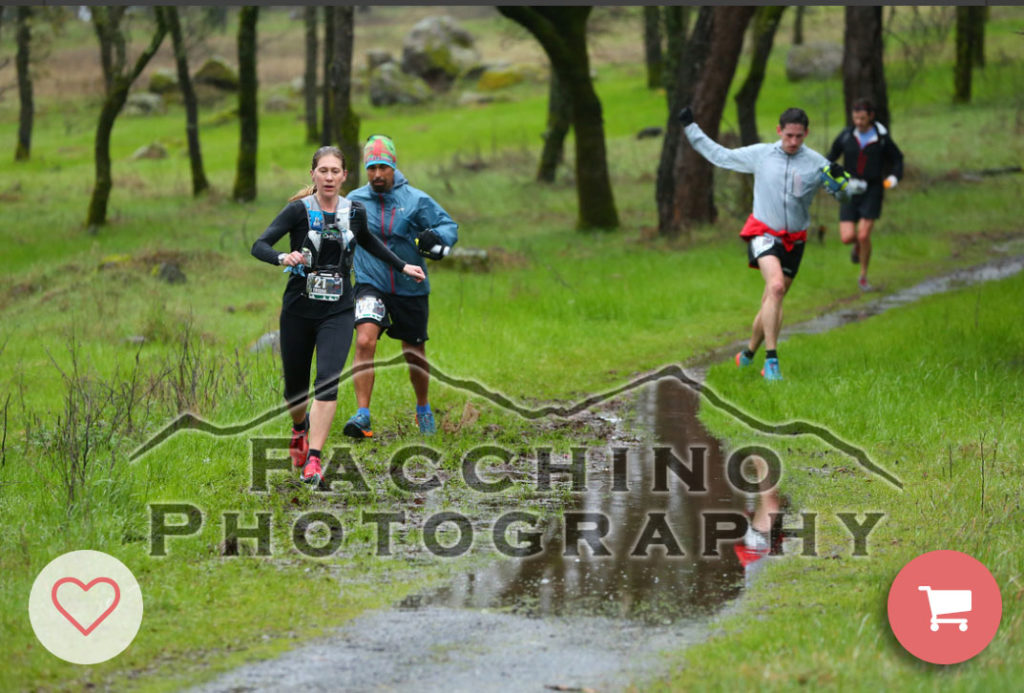 After a brief warm up and one last porta potty stop, I did a couple of strides and went to the start line. I chatted briefly with the lady next to me and then the countdown began. Strangely, I wasn’t nervous (unlike one of the ladies standing near me who looked petrified). I don’t know if it was because I have run so many races or because I knew my training hadn’t been ideal, but I knew I was as prepared as I was going to be and being nervous wasn’t going to change anything for the better. 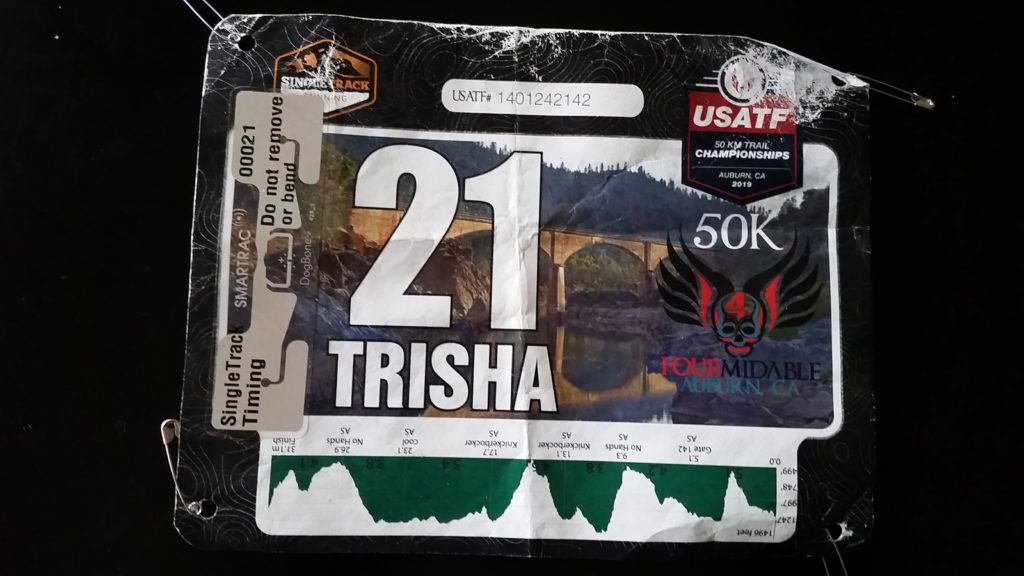 As the race started, I reminded myself that I needed to run my own race. Generally one of my strengths, I didn’t do a good job of that at the 50k championships in August and I was determined to do so this time. Having been warned that people bomb down the first downhill and not wanting to blow my quads up early I kept things calm, but strong. This also meant I ended up being alone.

On the first climb, I caught up to and passed a few guys. Some of the guys and I ended up forming a pack for a few miles. During that time, the guys nicknamed me “The Little Climber.” It was fun to have a group, but I had hoped to be around some women and none were in sight in either direction.

The middle of the race was a jumble of things with none of it being particularly exciting. There was some mud, SO MUCH WATER, and still no women. I continued to play leap frog with one of the guys from the earlier pack. Every downhill he would eventually catch up and pass me and every uphill I would eventually catch up and pass him. It was nice to have that friendly face there, but still no women.

Shortly after mile 17 I was completely alone. Now it was even more important to keep pushing. I had continued to remind myself that I didn’t know what was going on ahead of or behind me. If I didn’t stay focused to keep pushing hard, I might not catch a lady ahead who I couldn’t see who was faltering. And I sure didn’t want anyone creeping up from behind!

This section was ridiculously wet. It had been wet earlier – including the creek crossing I had been warned about around mile 12-13 and the one I didn’t have a clue about that was thigh-high (and, fortunately for me, they put up a rope to hang onto by the time I came through– but that didn’t hold a candle to the amount of water we would encounter on the trails in this section. Every trail was a creek, flat sections were ponds, and there were bridges that lead you over water only to end in another “pond.” At one point (ok, this happened more than once), I exasperatedly said out loud to myself, “You’ve got to be kidding! No more water!” There was more water.

Just before the second-to-the-last aid station, there were people yelling to me that I was the 6th woman. “That’s impossible,” I said in response. I had been in 9th place since mile 2 and hadn’t passed, been passed, or even seen a woman since then. There was no way three women ahead of me had dropped out. They again told me I was in 6th and that the 5th place woman wasn’t too far ahead and she looked terrible. I didn’t think it was true, but if it was, the top 5 earn prize money and if the lady ahead was feeling like crap, I was going to hunt her down and pass her!

More water awaited on the trails, making it that much more difficult to pick up the pace. I was still alone and in some sections I could see 3 or 4 minutes ahead. No terrible-feeling woman was in sight. No man – feeling good or bad – was in sight. No one. It was just me and the creeks, er, trails. At one place, three people were standing next to the trail. I sarcastically asked, “Is it always this wet here?” “NO!!!!” they exclaimed. I laughed as I ran off, tromping through more wet trails.

During the last few miles of this hilly and wet 50k I reminded myself to keep on it because there were two pretty demanding uphills to go, so it was possible that “The Little Climber” could still catch someone. I also had no idea who was behind me and how close they were. I knew Bree Lambert was back there somewhere. She’s a fast, tough masters runner and I didn’t want to get caught in the last few miles and end up not defending my masters title from last year after being in the lead for so long.

At this point, I started to feel hungry and thirsty. The sun decided to show itself a bit and, having chosen to wear a black long-sleeve with tight arms, I couldn’t roll up my sleeves. Go away sun! This section was dry (yes, dry!), open, and I was nearing the end of a long race with steep climbing ahead. I didn’t need to get too warm now.

Finally, I saw a woman ahead! She is a crazy fast runner and was walking, so I knew she was feeling terrible (mad respect for walking it in). After I passed her I wondered, was I in 5th or 8th place now? Who knows? All I knew is that I was going downhill again. That meant the upcoming uphill section was going to be even steeper. And it was quite steep. At one point I tried fast hiking (which I never do) to see if it was more efficient. It wasn’t and it didn’t feel good, so I went back to “running.”

As I neared the finish line, there was a trail to the right and a trail going up. The lady I talked with at the start had told me that the end was convoluted and they made you run around the finish line before crossing it, so I thought I probably had to go to the right. I was trying to break 5 hours and my watch said 4:59, so I was getting close! Fortunately, two ladies were sitting there. “Which way do I go?!?!” “Go straight up!” “Thank you,” I huffed as I pushed up, crossing the finish line in 4:59:14. 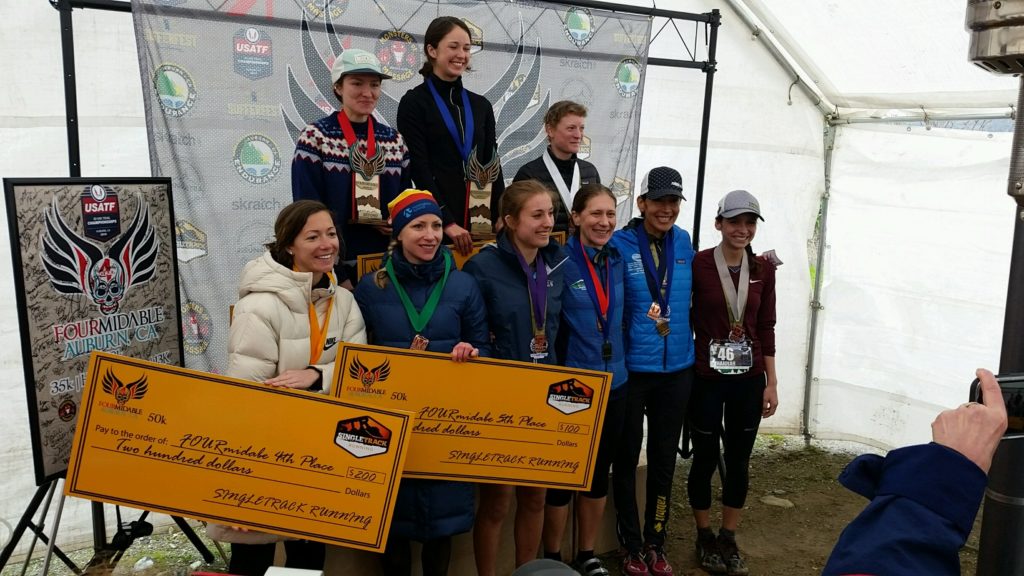 Did I finish in 5th or 8th? I had already prepared myself not to get excited. I’m good at counting what place I’m in. No woman had passed me and I had only passed one, so I must have been in 8th. Sadly, nothing was announced as I came in other than my name and that I was from Seattle. What place was I?! Didn’t I just win the masters national championship?! A woman put a medal over my head and I somewhat frantically asked her, “What place did I finish?!” “I don’t know.” Pointing to the lady to her right who was writing on a clipboard she said, “She should know.” I again asked, “What place am I?” “I don’t know,” she replied (what was on the clipboard then?). Finally, a guy I had met the evening before came out of a tent near the finish to congratulate me. He gave me a big hug and I asked him, “Do you know what place I finished?!” He said he didn’t and went back into the tent to find out. He came out quickly and told me I was 7th. 7th?! That wasn’t one of the options. Was he sure? Yes. Was I the first masters woman? Let me check…Yes. Yes!!

Here’s a link to my race photos: https://facchinophotography.zenfolio.com 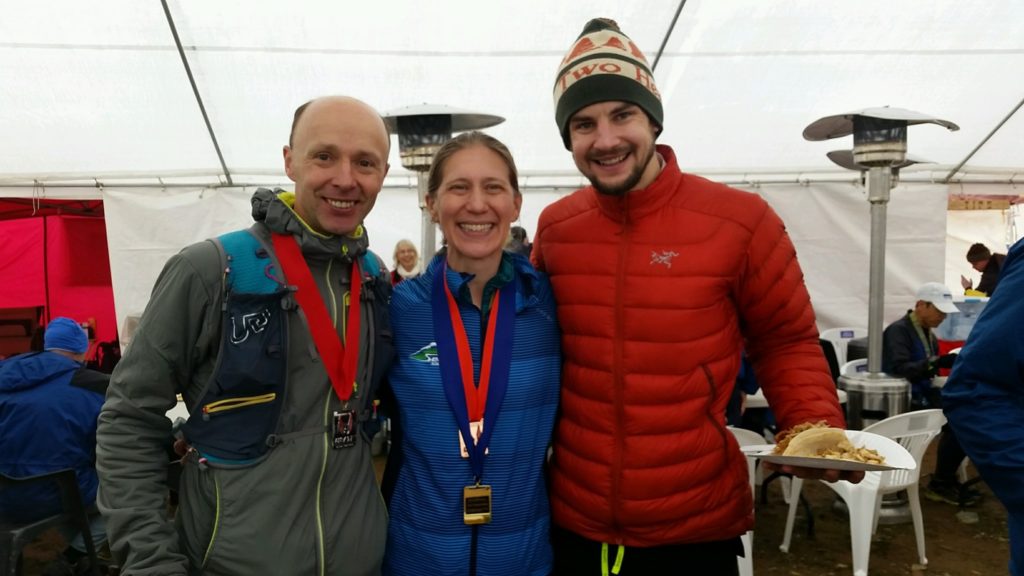